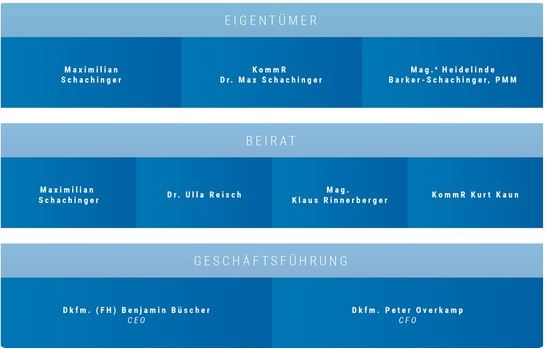 By December 6, 2016 – almost exactly to the week 50 years after his father’s entry into the company – Maximilian Schachinger III becomes the Chairman of the new Advisory Board of Schachinger Logistik. In his new role, he will act as brand ambassador for the industry logistics specialist.

He will be supported by the new members of the Advisory Board KommR Kurt Kaun, a successful entrepreneur and former president of the Economic Chamber of Upper Austria, lawyer Dr. Ulla Reisch as a proven expert in matters of company law, and Mag. Klaus Rinnerberger an industry-experienced manager.

The operational management of the holding company will be formed by Dkfm. Peter Overkamp as CFO, and Dkfm. (FH) Benjamin Buescher as CEO.

Peter Overkamp has been creating the success of Schachinger Logistik for 10 years and will manage the expanded commercial agendas. Benjamin Buescher, who joined the company in March 2016, is Chief Operating Officer in charge of sales and IT agendas, and will also take over the marketing & sustainability tasks.

Maximilian Schachinger III: “Over many years we have developed the implementation of sustainable logistics, recognized quality and a competitive advantage, and we received a sensational 15 awards within three years. Now it is about time to take on the next challenges on this basis and to shape our future successfully.”