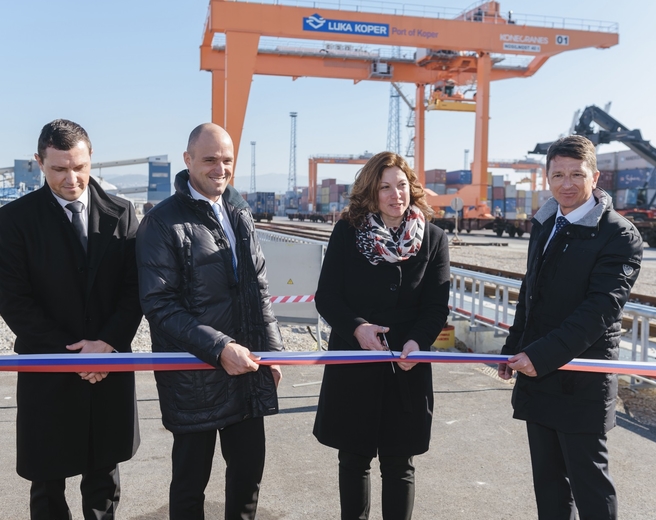 With the accomplished crane rails construction at the container terminal and following the presentation of the new RMG cranes (overhead travelling cranes on rails), Luka Koper successfully brought to an end the first part of its substantial investing in the container terminal. By 2020, the largest part of planned investments, namely EUR 235 million will be invested in the same terminal.

On 14 February, Luka Koper showed its business partners the on-site operation of the new cranes (to be followed by another one in the next months) which will be fully operational in the coming weeks. The introduced technology is brand new and has not been applied in Koper by now.

Since the RMG cranes move on rails, a new 740-metre-long crane lane had to be constructed and the warehousing blocks at the same terminal had to be moved. Nevertheless, the new cranes will significantly contribute to increase the productivity at the container terminal where operations will proceed much faster than with the previous machinery. In addition, the new cranes will enable the loading/unloading of containers on five trainsets simultaneously.

Until recently, Luka Koper had three railway tracks that were previously extended and subsequently, they built additional two tracks, each 700 metres long.

“Luka Koper already holds one of the largest shares in the modal split, namely 60 percent and maintains the leading position in the Adriatic region in this segment. Last year, we dispatched 22,879 trains, which is 7.6-percent more than in the previous year. Only at the container terminal, we register on average 24 arrivals and departures of block trains per day and these trains connect Koper with all industrial centres of Central Europe”, pointed out Dragomir Matić, the president of the management board of Luka Koper while inaugurating the crane rails.

This year, when the company celebrates its round number anniversary, namely 60 years of its establishment, will represent a landmark. Namely, its getting ready for one of the largest infrastructural challenges taking place over the last ten years, namely the container terminal shore extension by 100 metres and the construction of additional warehousing surfaces for containers in the terminal’s hinterland. Already next month, two new super post-panamax cranes will come which will allow the port to operate even on the largest container ships with 20,000 TEUs capacity.