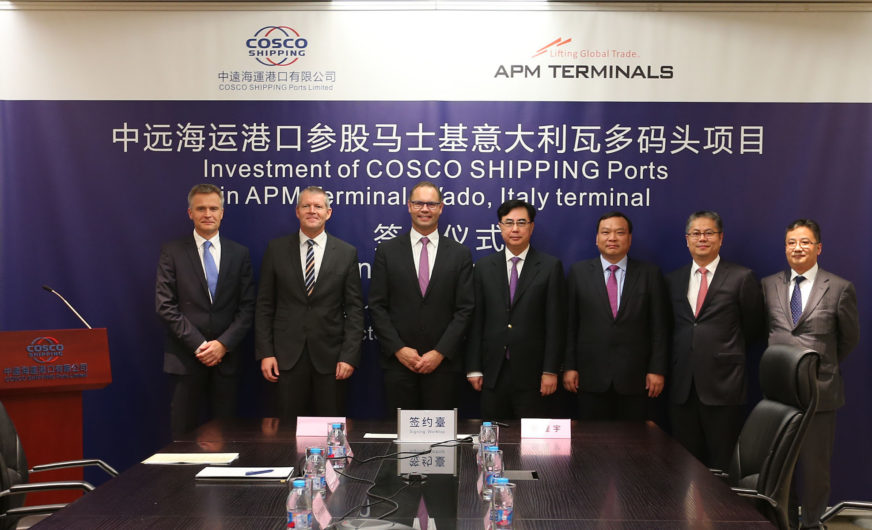 APM Terminals has concluded an agreement with China Cosco Shipping Ports subject to customary conditions for the sale of a minority share in a new joint venture created for the APM Terminals Global Terminal Network’s operations in Vado, Italy. A similar agreement was also concluded with Qingdao Port International Development (Hong Kong) Co., Limited, a wholly-owned subsidiary of Qingdao Port International Co., Ltd. which shall become an indirect minority shareholder in the joint venture.

The agreements include interests in both the existing Reefer Terminal in Vado, the largest refrigerated cargo facility on the Mediterranean Sea, and the new 800,000 TEU capacity deep-water terminal currently under construction at the Port of Vado. APM Terminals will have a 50.1 per cent share and will operate both the Reefer Terminal and the APM Terminals Vado container terminal; Cosco Shipping Ports will have a 40 per cent share and Qingdao Port International Development (Hong Kong) Co., Limited a 9.9 per cent share.

Cosco Shipping Ports is a subsidiary of Cosco Shipping Group which assumed control over the Greek Port of Piraeus earlier this year. With the support of its affiliated shipping line, Cosco Container Lines, the world’s number one in total tonnage and number four in container capacity, it has been expanding its operations in the Mediterranean Region as part of the “One Belt One Road” initiative to strengthen logistics links between China and Europe.

APM Terminals and the Qingdao Port Group, which has also been expanding its global presence, have existing joint venture relationships with shared investments in QQCT and four other container terminals in Qingdao, and most recently, Qingdao Port Dongjiakou Multi-Purpose Terminal. Qingdao Port is the fifth-largest container port on the Chinese Mainland, and the 8th-largest world-wide, with 17.4 million TEUs handled in 2015.

The Port of Vado is located in north-western Italy in the region of Savona on the Ligurian Coast, near Genoa, Italy’s busiest container import/export port, with a throughput of 2.24 million TEUs in 2015. The expansion of Vado’s facilities is part of the port’s master plan to create new and improved supply chain capabilities for markets in Northern Italy, Switzerland and Southern Germany.

APM Terminals Vado will be a new semi-automated container terminal scheduled to become operational in 2018, with the unique ability to accommodate Ultra-Large Container Ships (ULCS) of up to 19,000 TEU capacity without any physical restrictions among North Italian ports

In August 2015, APM Terminals purchased the existing Vado Ligure Reefer Terminal, which has an annual capacity of 275,000 TEUs and more than half a million tons of refrigerated fruit. Operations at the Reefer Terminal will be merged upon completion with the adjacent APM Terminals Vado container terminal.