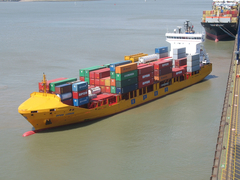 On July 1st, OPDR officially joined the CMA CGM Group: In order to finalize the acquisition, which was announced on November 25th 2014 by Mr. Jacques R. Saadé, founder, Chairman and Chief Executive Officer of the CMA CGM Group, the approval of Moroccan and European Union competition authorities was necessary. On June 29th, the European Commission finalized the process by giving its approval without any conditions.
OPDR is a sea carrier that was part of the Bernhard Schulte Group. It is specialized in short sea maritime services and door to door logistics solutions between North Europe, the Canary Islands, the Iberian Peninsula and Morocco. The company employs 200 persons in different agencies.
The OPDR fleet sails 4 trades between:
– North Europe and the Canaries
– South of Spain and the Canaries
– North Europe, Spain and Portugal
– North Europe and Morocco.
OPDR and MacAndrews capacities combination will reinforce the European offer of the CMA CGM Group, and its tailor-made intermodal solutions. MacAndrews is the oldest European sailing company. It was acquired by the CMA CGM Group in 2002. MacAndrews offer its clients railroad, road and maritime transport and is specialized in container transport on short sea lines and in European multimodal solutions between the Iberian Peninsula (Spain and Portugal), United Kingdom, Ireland, the Netherlands, Scandinavia, Poland, Baltic States and Russia.
In 2014, OPDR transported around 200,000 TEUs, and MacAndrews more than 230,000 TEUs. OPDR will be a subsidiary of MacAndrews. To maximize their efficiency, OPDR will be included to MacAndrews.
Farid T. Salem, Executive Officer of the CMA CGM Group: “This new acquisition reinforces the Group’s presence on the growing European short sea transport. It is in line with the CMA CGM Group’s densification of the regional network strategy that started with the acquisition of MacAndrews in 2002. As we did with this subsidiary, we want to maintain OPDR, develop it and create new interactions with MacAndrews and with the CMA CGM Group”.
www.cma-cgm.com