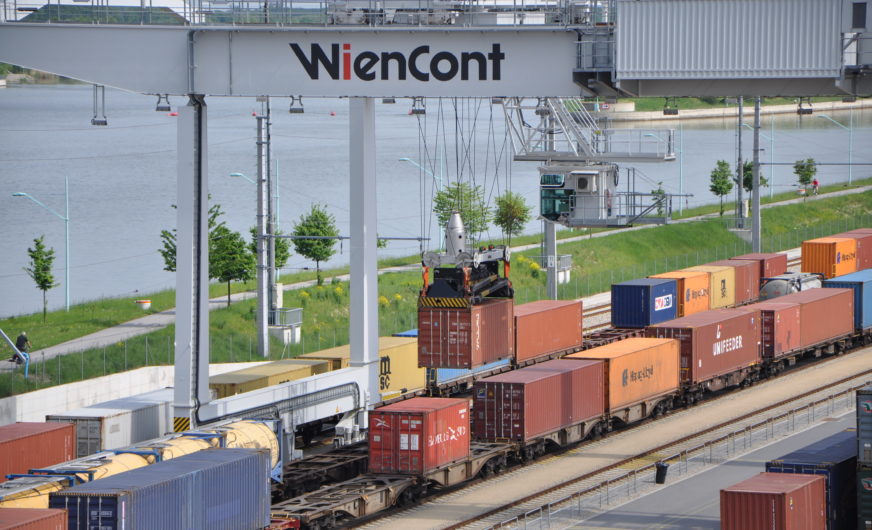 The planned investments will be used to increase the storage and throughput capacity. A new Terminal Operating System (TOM) is being programmed, and the existing Ingate will be automated: Drivers can register directly from the truck, thus saving time.
From summer 2016 WienCont – Austria’s biggest container terminal and depot, and a company of Hafen Wien – will provide more space for interim storage of craneable trailers, tank and box containers. A reach stacker by Kalmar has also started operation to increase the throughput performance of the fleet of 15 full and empty container stackers and 3 gantry cranes.
“Thanks to the 24/7 operation and short time windows there are still enough free slots available for planned train projects. Further stages of expansion will provide five additional tracks of the length of a block train on those areas which were created by partially silting up the harbor basin,” reads a press release.
Currently WienCont handles around 100 block trains per week. Priority destinations are the ports of Hamburg and Bremerhaven with more than 40 trains a week, followed by Rotterdam with 14 trains, arriving at the WienCont Terminal Vienna Freudenau via Duisburg, Enns and Linz.
Rail Cargo Operator is planning to launch up to 3 direct trains between Rotterdam and WienCont. Koper is connected via a daily block train via Villach and Trieste. A shuttle runs once or twice a week directly to Koper. Four trains per week travel from WienCont to Antwerp and vice versa. 30 trains connect the Ruhr area with Vienna Freudenau.
A national train from Gebrüder Weiss and Rail Cargo Austria offers a daily link of Bludenz and Hall to WienCont; more connections are being planned. Twice a week, trains from Vienna Freudenau are operated to Budapest, Arad, Rijeka and Moscow and soon also to Istanbul. More projects provide for the establishment of trains to Poland and Croatia as well as the integration of the Trans-Siberian Railway.
In 2015 about 450,000 TEU passed the WienCont terminal in Vienna Freudenau. This means a year-on-year decline (2014: 477,000 TEU), but still is one of the highest throughput volumes in the company history.
www.wiencont.com