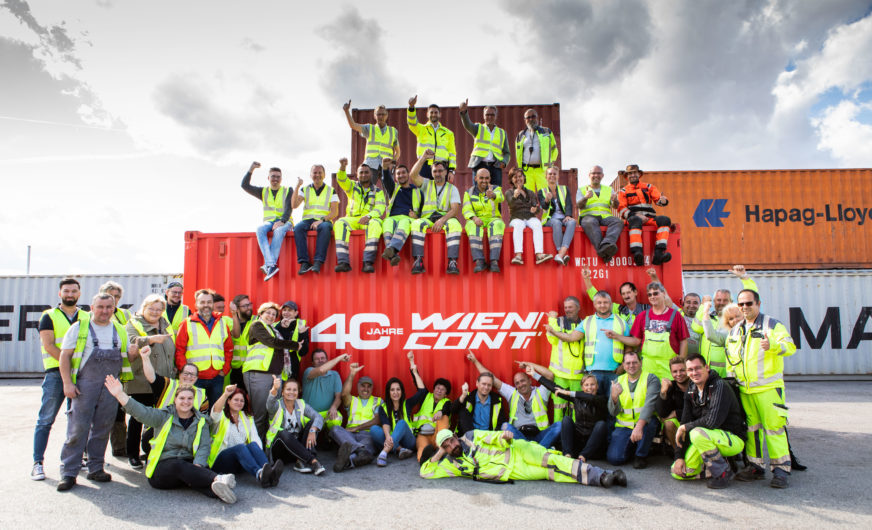 WienCont, a subsidiary of the Port of Vienna, has been operating one of the largest and most modern container terminals in a European inland port for 40 years. Founded in 1979, WienCont reached a container volume of more than 100,000 TEU in 1992 for the first time. The rapid growth is also due to the ideal location of the Port of Vienna: at the interface of road, rail and river.

One of WienCont’s biggest future business potentials is the handling of non-cranable semi-trailers: the first train connection between Duisburg and Vienna is expected to start in the first half of 2020 and will be handled exclusively at the WienCont terminal in cooperation with Helrom, as the container terminal operator in announces a press release.

Up to 100 train connections – among others between Hamburg, Rotterdam, Duisburg or Koper – are handled per week at the location. Since the beginning of 2019, WienCont has also offered a neutral train shuttle service Vienna-Budapest-Vienna with at least three departures per week.

In addition to container handling, WienCont also offers its customers extensive additional services such as customs clearance, repair, trucking, Stuffen & Strippen and SOLAS weighings. Trade in new and used containers completes the portfolio. In 2018, WienCont sold around 1,000 containers. For 2019, this figure is expected to rise considerably.

With a storage capacity of 8,000 TEU at their empty container depot, WienCont offers sufficient space for storage, check-in and repair of the containers. Container repair services can also be handled outside the terminal as needed. With three gantry cranes and 15 container forklifts, they are handling up to 400,000 TEU per year on a terminal area of approximately 170,000 m². This means the container terminal in Vienna Freudenau has one of the highest throughput volumes in Austria. Currently, WienCont has about 90 employees, who were able to generate sales of EUR 11 million a year.

Since August 2018, WienCont’s container terminal has been supplied with 100 percent green energy from hydropower. This was the first step in making WienCont the first CO2-neutral terminal in Europe. This will save around 160 tonnes of CO2 per year in Vienna. Both the overhead cranes and the trains on Terminal 2 and 3 are supplied with 100 percent hydropower too. Thanks to the high swing entry into the port area, the trains on Terminal 1 do not need any electric power supply at all.