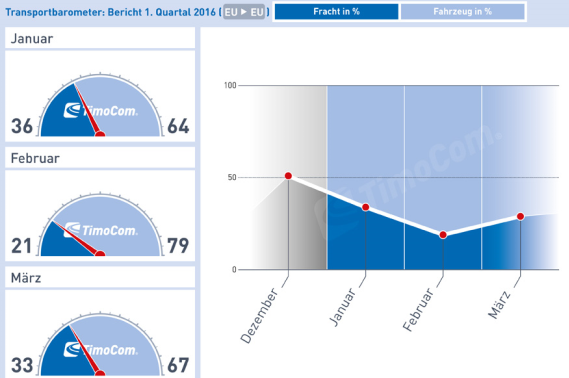 Europe’s transport industry has had a weak start into the first quarter of this year. This becomes evident with the current figures of the TimoCom transport barometer. Accordingly the freight to vehicle ratio was 30:70 in the first quarter. However, the transport market seems to be thawing in line with the increasing spring temperatures.

The year 2016 had been starting very moderate, with a decline in empty cargo holds in Europe. At the end of January the TimoCom transport barometer showed a freight share of 36 percent – six percentage points less than in the previous year.

However, the transport industry still had to face a harder loss than this one. In February there was a clear imbalance in the freight to vehicle ratio in the transport market: 21 percent of freight offered was opposed to 79 percent of free capacity. Thus February was the weakest month in more than five years.

“We see the impact of the challenges the European transport and logistics industry has been facing for many months,” says Marcel Frings, Chief Representative TimoCom. “The threat of terrorism and the refugee crisis resulted in closed borders in the Schengen area. The previously free flow of goods, is now squeezed through bottlenecks. ”

In March there was traditionally more transport again. The spring awakening had also a stimulating effect on the transport market. The freight share increased by 12 percentage points to 33 percent (2015: 40%) and was thus showing the direction also for the coming months.

“Although the Ifo World Economic Climate has worsened for the euro area at the beginning of the year, from now on, the economy will revive, because people go outdoors. This has traditionally direct impact on the European transport market. We expect to see increasing freight orders in the coming weeks on the TimoCom transport platform, ” says Marcel Frings.