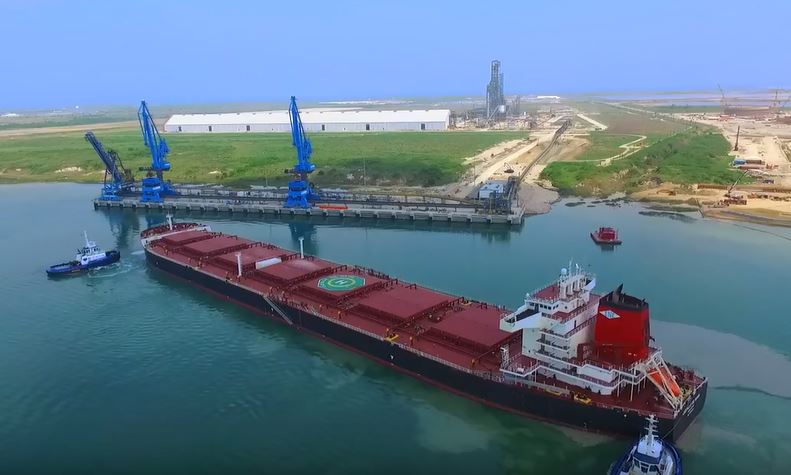 With the completion of the direct reduction plant in Corpus Christi, Texas, the voestalpine group has set a further milestone in implementing its international growth strategy: on October 26, after around two-and-a-half years of construction, the world’s largest and most state-of-the-art plant of its type was officially opened.

At EUR 550 million, the plant is the largest investment ever made in the US by an Austrian company. Each year it will produce two million tonnes of high-quality HBI (Hot Briquetted Iron, or sponge iron), a sophisticated pre-material used in steel production. The plant is already regarded as an environmental benchmark and is an important first step on voestalpine’s path of reducing CO2 emissions in steel production.

“Today’s opening of the direct reduction plant in Corpus Christi is an important step for — and into — the future of our company. The new plant will not only secure the Austrian voestalpine sites by supplying premium pre-materials for steel production, it will also contribute significantly to further strengthening our position in the NAFTA region. Furthermore, over the long term it offers us new technological options for decarbonising steel production”, said Wolfgang Eder, Chairman of the Management Board of voestalpine AG.

The new plant, the largest and most modern plant of its type in the world, covers an area of two square kilometres. The plant’s own deep-sea port can currently handle five million tonnes of material each year (3 million tonnes of iron ore pellets and 2 million tonnes of HBI). The 137-meter-high reduction tower forms the heart of the plant and is the highest building in southern Texas. voestalpine Texas LLC is creating 190 new jobs at the plant, and will generate value in the region to the sum of around USD 600 million over the coming decade.