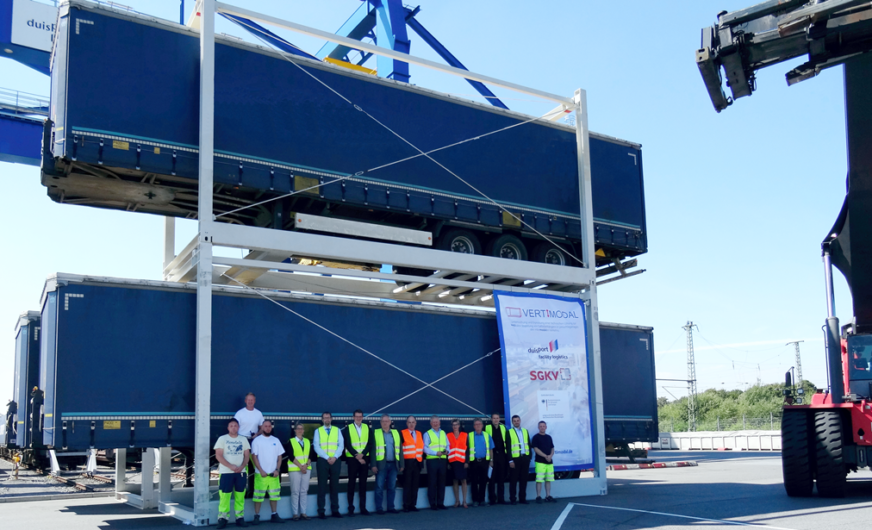 For years, transportations of semi-trailers on the rail have been climbing sharply. From 2005 to 2015 the figure increased from 150,000 to 832,000 units. As pleasing as this shift might be at the first glance, it is also difficult to operate in the terminals that are designed almost exclusively for container handling in combined transport.

Because trailers can not be stacked and require maneuvering of the tractors, a single trailer needs about the same storage space as nine 20-foot containers. However, since customers increasingly demand trailer throughput, terminals reach their capacity limits very quickly.

Against this background, duisport facility logistics GmbH (dfl) and SGKV have launched the VertiModal project almost three years ago. The project, funded by BMWi, pursued the goal of minimising the space required by trailers in the terminals. This was achieved by developing a cost-effective and flexible steel frame, which was now shown at the final presentation of the project.

Thanks to this frame the trailers can be stacked in three layers and can also be placed very close to each other by crane or reachstackers, like containers, regardless of distances required for shunting.

Prof. Thomas Schlipköther (CEO Port of Duisburg) sees great potential within this stacking solution, to tackle the problems caused by the rising trailer volumes. The Port of Duisburg “wants to optimise this frame solution and subsequently use it at its combined transport terminals in the Port of Duisburg”.