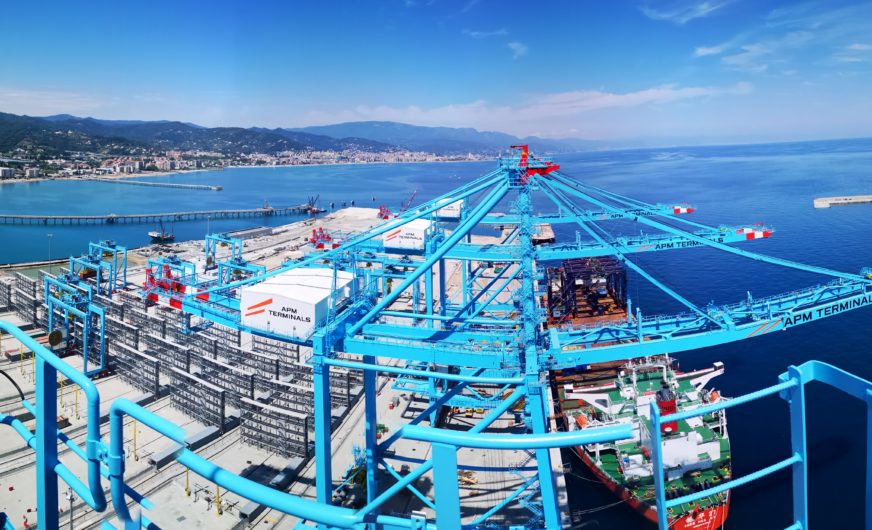 Vado Gateway (Savona), the new container terminal within APM Terminals portfolio opened on 12 December with a ceremony attended by all the employees and several national and local authorities. The most important port infrastructure development in Italy in the last decades is the result of a total investment amounting to about EUR 450 million. The terminal was commissioned by Autorità di Sistema Portuale del Mar Ligure Occidentale (Western Ligurian Sea System Port Authority), which will now entrust APM Terminals with the management of the facility for the next 50 years.

“Strengthening our presence in Vado Ligure reaffirms our commitment to the region and the role it plays on the European logistics map. Vado Gateway is an important part of A.P. Moller – Maersk’s overall ambitions and strategy to become an integrated container logistics company that truly connects and simplifies global trade to help our customers grow and thrive”, shares Morten Engelstoft, APM Terminals Chief Executive Officer.

Vado Gateway is expected to significantly increase the competitiveness of the Ligurian and Italian port infrastructure, making it a true hub for cargo moving to the northern part of the country, as well as markets north of Italy, such as Switzerland, Germany or north-east France. It is therefore referred to as one of the maritime terminals of the “New Silk Road”.

In addition to the newly opened facility, APM Terminals Vado Ligure Spa also runs the adjacent Reefer Terminal of Vado Ligure, which is the biggest logistic hub dedicated to fruit in the Mediterranean. Once fully operating, Vado Gateway capacity will amount to circa 900 000 TEUs per year, which, together with the 250 000 TEUs of the Reefer Terminal, will allow the Port of Vado to handle over one million TEUs every year.

Vado Gateway is a semi-automated terminal, which significantly increases the competitiveness of the Ligurian and Italian port infrastructure. It will initially operate on a 450-metre part of the quay, but from July 2020 its whole 700-metre extension will be available for use.

With a depth at quay level of 17.25 metres and height of 4.5 metres above sea level, Vado Gateway will be able to accommodate and operate the latest generation Ultra large container ships (ULCS) without any limitations. The container terminal is also equipped with various latest technologies, most notably its state-of-the-art cranes.

The yard used for container storage and handling is the first in Italy to be completely automated. Automatic Rail Mounted Gantry (ARMG) cranes will work autonomously under the remote supervision of highly specialised operators. This will allow highest safety standards, as no personnel will be present in this area while containers are being moved. Access to the yard will only be allowed for maintenance work when the cranes are not operating.

Another important feature is the intermodal connection potential. APM Terminals’ target is to move 40% of containers arriving to or departing from Vado Gateway by rail, taking advantage of the rail infrastructures which are under development in Vado. At the beginning, there will be 4-5 trains connecting Vado with several intermodal hubs in the North and East of the country, including Milano and Padova, but the number is bound to constantly increase over time.