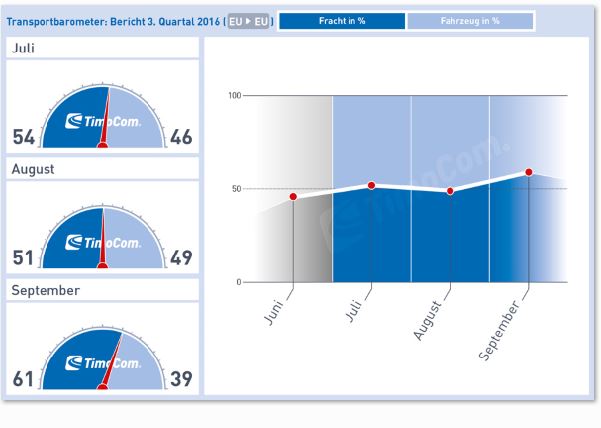 The TimoCom transport barometer shows a cargo to capacity ratio of 55:45 for Q3 2016. This means Europe’s biggest transport platform registered a cargo surplus on the European transport market – with a noticeable upswing in autumn.

The 3rd quarter has been showing the biggest cargo volume of the year. But that was not all: Compared to the same period of the previous two years, all three months were above on the theoretical optimum of 50:50 this time. This is a noticeable upward trend, which not only applies to the development of the past years. For the first time in 2016, each month of the quarter showed a cargo surplus.

The annual and quarterly highlight in September meant the possible start of a golden autumn for cargo business: With 61 percent freight compared to 39 percent of free cargo capacity, the transport barometer showed its high for the year so far. The previous best month of the year 2016 was May, with 2 percentage points less. This significant increase results from the good, waning summer, that caused once again a lot of movement of persons as well as in the transport industry.

Regarding the absolute figures in Q3, both, more freight and capacity offers were placed on the TimoCom transport platform, than in the same period of the previous year.

After this strong Q3, the exciting question is now whether the upswing is turning into a golden autumn. TimoCom Company Spokesman Marcel Frings is confident: “The signs from September indicate big cargo volumes for this autumn. The high level will apparently be maintained.” However, there is room for speculation in November: Will there be a slump as strong as last year, down 11 percentage points?

Marcel Frings said: “The German economy is well utilized by a stable labor market and high consumption, and could act as a driver for Europe.” For TimoCom this means that the Transport barometer can also show a cargo surplus at the end of the year.