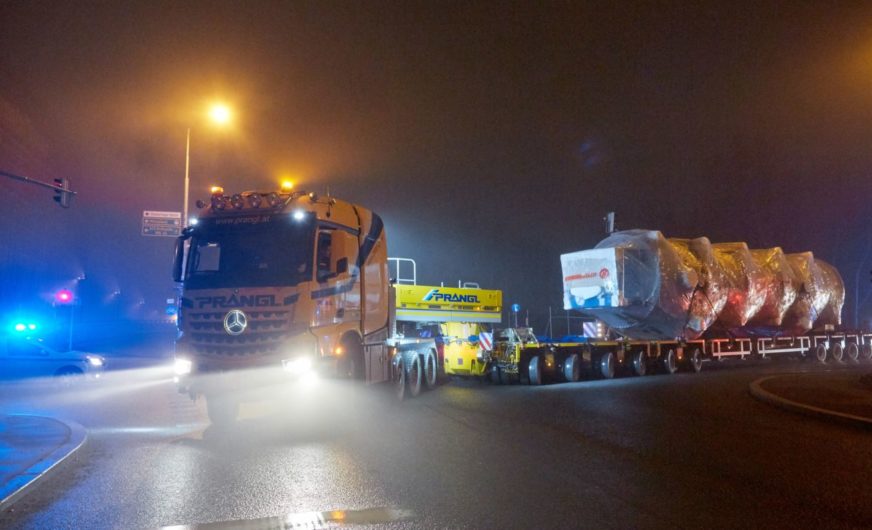 The positioning of two dryers of 117 tonnes and 15 metres, demands several of Prangl’s disciplines. The two sewage sludge dryers were transported – on two separate days – from Upper Austria to Vienna on a total of 18 axles. Their night-time transportation through Vienna was particularly spectacular.

The trained Prangl drivers skilfully manoeuvred the 39-metre long heavy transport units through all of the tight spots in the federal capital. A 100 tonne loader crane supported the transport with numerous traffic control measures, such as the temporary clearance of concrete safety barriers.

Due to the limited space at the site, it was necessary to unload the extra-long containers by a 500 tonne telescopic crane. After brief interim storage, the yellow giant raised each respective dryer onto the PVSL 75 re-railing system.

Only special rail system permitted to move the objects into the destination building. The limited access height posed no problem either, thanks to the extremely compact design

The dryers were then finally pushed into their end position and connected professionally. The two new sewage sludge dryers have already begun drying dewatered sludge, which is subsequently blended with used oil and heating oil in a mixer. The combustion that follows this process generates electricity and district heating for the city of Vienna.