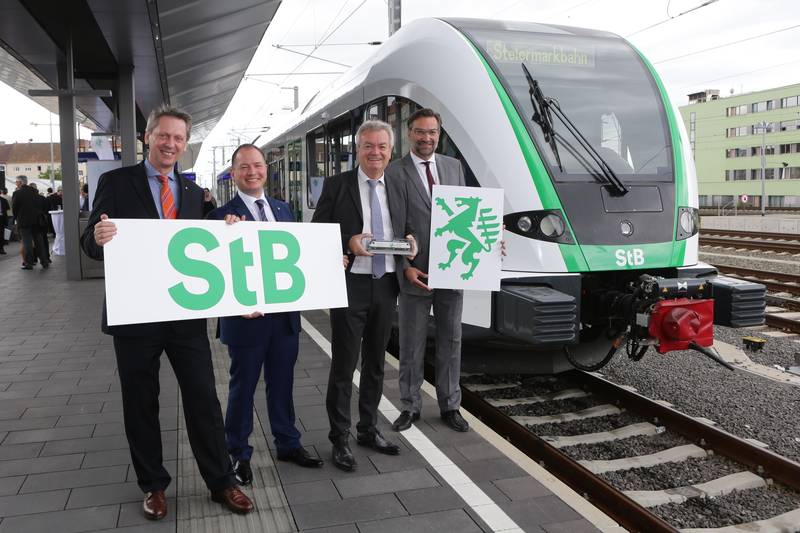 Founded in 1890 for the administration of several Styrian regional railways, Steiermärkische Landesbahnen today provide passenger and freight transport as well as extensive logistics services in Styria, Austria and much of Europe as a modern, regionally anchored mobility service provider. They are an important partner of the state of Styria and the federal government, the municipalities and regions, the economy and not least the customers and passengers in public transport.

On 29 June, Transport Councilor Anton Lang, State Construction Director Andreas Tropper, the Managing Director of the Landesbahn Ronald Kiss, and Managing Director Gerhard Harer presented the new structure of the company as well as its new brand appearance. Steiermärkische Landesbahnen will become the new Steiermarkbahn. Also after the restructuring, the state of Styria will remain the sole owner of the Landesbahn. Transport Councilor Anton Lang: “With the restructuring we have created the right conditions for the Landesbahn for this development of environmentally friendly passenger and freight transport.”

On June 1, 2018, the new Steiermarkbahn was spinned off from the Steiermärkische Landesbahnen. The European law and the national legal requirements made it necessary to clearly separate the operation of the infrastructure and the transport service, both organisationally and legally. This is implemented by the following new legal and organisational form, as follows:

– Steiermärkische Landesbahnen (STLB) is the business enterprise of the province of Styria.
– Steiermarkbahn und Bus GmbH (STB) for the main handling of public transport service contracts in the railway and bus sectors.
– Steiermarkbahn Transport und Logistik GmbH (STB TL) for the handling of freight and logistics services as well as special services as a subsidiary of STB.

The Graz Süd terminal is located on the Baltic-Adriatic corridor and TEN-Corridor X and since its opening in 2003 has developed into an important logistics center not only for Styria, but also for the entire south-eastern European economic area. Ronald Kiss: “The Graz Süd terminal is an important partner of the Styrian economy. With the completion of the Koralmbahn the connection to the Baltic – Adriatic corridor will give this terminal an even more important role in the logistics sector. It is therefore important to secure the terminal as the hub of choice, to build on the success and thereby to promote the business location of Styria.”

Gerhard Harer, who heads the two companies STB and STB TL, sees great opportunities for the further development of companies, both in passenger and freight transport. In freight transport, the service portfolio of STB TL will be developed further to include innovative transport and logistics services.

In addition, the Koralmbahn connection is of great popular and regional economic importance. Harer: “The Koralmbahn as part of the Baltic-Adriatic corridor thus also strengthens the competitiveness of the domestic companies and the regions. The transport of goods in the south of Austria by train will be more attractive. With the location of the STB TL in Styria – right next to the Corridor X and the Koralmbahn – the best conditions are in place to expand the business of STB TL towards Adriatic ports.”

The restructuring of the Landesbahn also represents a new start.The new image, which was presented to the public for the first time on June 29 and is now being successively implemented in all areas of the company, should also make this visible. “Fresh – clear – modern” is their motto. The prelude took place with the presentation of a newly branded S-Bahn articulated rail car.