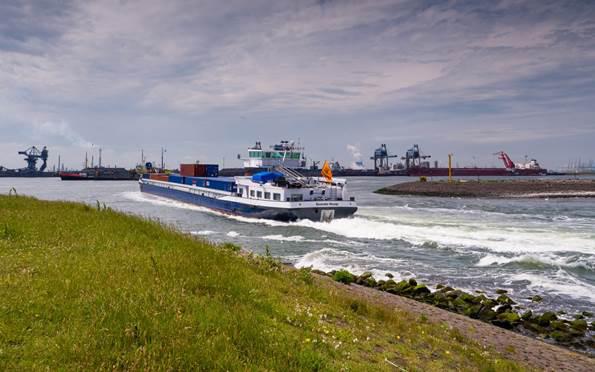 The investment of around EUR16 million is in line with the policy of the commissioning parties – the Dutch Ministry of Infrastructure and the Environment and the Port of Rotterdam Authority – to improve the hinterland connections by water and make them more efficient.
Around 50,000 ships a year, mainly inland vessels, make use of the connection between the Caland Canal and the Nieuwe Waterweg opposite Hoek van Holland. The widening operations will calm the current and substantially increase the capacity.
The Breeddiep is a 75-metre wide connection between the Splitsingsdam, built in 1969, and the Rozenburg Peninsula. Due to the current and the restricted visibility, only one-way traffic is possible at present, under the supervision of the Hoek van Holland Traffic Center. The connection is becoming increasingly popular, because the Hartel Canal – the main artery for inland shipping traffic – has a height restriction for ships loaded with 4 layers of containers, depending on the water level.
The costs will be shared equally between the Government and the Port Authority. Preparations for the widening operations have already started. At the end of the year, a contractor will be selected. The plan is to complete the widening operations by the end of 2016.
www.portofrotterdam.com