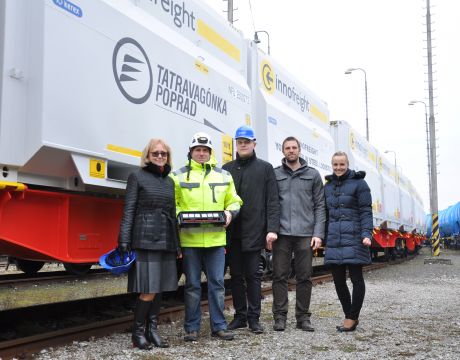 In early December delivery was started of the first own InnoWaggons to Innofreight forwarding company. Since mid-December 2015 some of the total 200 units ordered at Tatravagonka are being used with US Steel Košice.
This is a further sign of Innofreight and the Rail Cargo Group for progress and innovation across Europe. Innofreight and the Rail Cargo Group are jointly operating the pan-European InnoWaggon pool. ÖBB Rail Cargo Waggon as holder of the wagons provides the operative support of the wagons.
Innofreight will dedicate also the year 2016 to innovation.
Innofreight’s modular approach permits improving flexibility and productivity when using containers for interim storage, also with InnoTank, which was developed recently for the transport of liquid cargo. Furthermore, improvements in terms of cleaning and extending the life cycle can be achieved by separating the superstructure and the rolling carrying wagon. Hence Innofreight is adding innovative solutions for liquid cargo transport on the railway to its portfolio.
In the segment of sand, gravel, granulated slag and limestone Innofreight achieved another milestone through developing the RockTainer SAND. The 40ft container has a cargo capacity of 64 m³ and a net load of
68 tonnes. The container is designed as a universally useable, payload and volume optimised box for the construction industry.
www.innofreight.com