Hamburger Hafen und Logistik AG (HHLA) can look back on a very successful financial year 2018, beating the previous year’s already strong result. Container throughput went up slightly, despite a more subdued market environment in the second half of the year. This increase was also due to the successful integration of the new acquisition, Estonia’s largest terminal operator, HHLA TK Estonia AS.

Stable year-on-year results from container transport and successful property management led to revenue of EUR 1.29 billion (+3.1 %). The operating result (EBIT) was up significantly on the previous year, as prior-year expenses totalling approximately EUR 25 million for organisational restructuring and the harmonisation of pension schemes no longer applied. But even when adjusted for this effect, the operating result (EBIT) still increased moderately.

As a result of the takeover of North America services and the first full-year consolidation of throughput volumes of the container terminal HHLA TK Estonia AS (formerly Transiidikeskuse AS), HHLA expects a slight overall increase in container throughput in 2019. Slight year-on-year growth is also expected for container transport. At a Group level, this should lead to a slight increase in revenue.

The operating result (EBIT) of the Port Logistics subgroup is expected to rise significantly year-on-year in 2019, largely due to the changes in lease accounting (IFRS 16) as of 2019. Earnings for the subgroup will be shaped largely by the Container and Intermodal segments. Stable EBIT growth on a par with the previous year is expected for the Container segment, while significant growth is expected for the Intermodal segment. 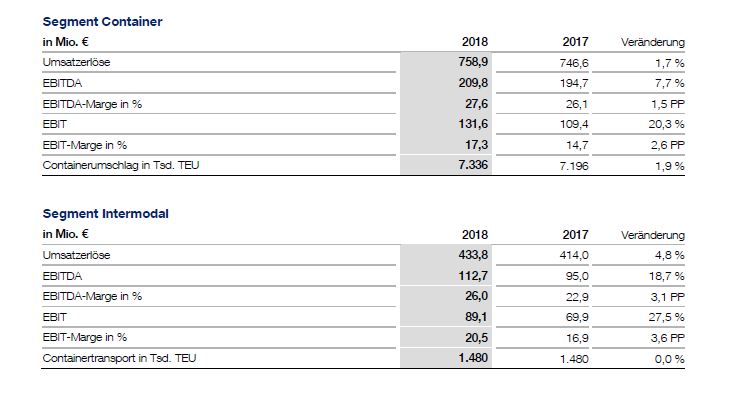