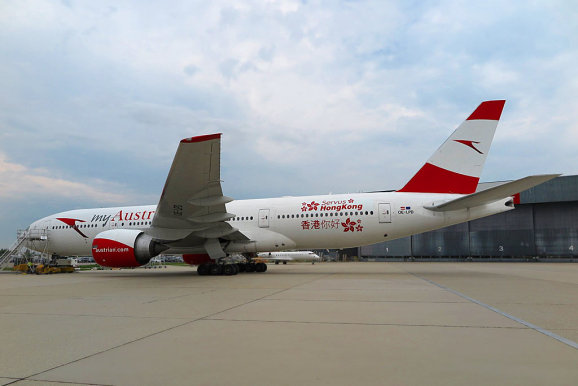 Since the 5th of September, Austrian Airlines serves another destination in Asia from Vienna International Airport. Up to five times a week a Boeing 777 takes off to Hong Kong. “As a result, we are now offering flights to Shanghai, Beijing and Hong Kong, the three biggest cities in China”, explains Austrian Airlines Chief Commercial Officer Andreas Otto.

And he adds: “Following the successful expansion of our flight offering to North America, we are now focusing on China. In spite of the latest reports about an economic downturn, growth forecasts still predict promising economic expansion for China in the coming years. For this reason, we foresee an interesting growth potential for Austrian Airlines especially in large cities such as Shanghai and Hong Kong.

For its inaugural flight to Hong Kong, Austrian Airlines specially branded a Boeing 777 with the registration OE-LPD. With the lettering “Servus Hong Kong” Austrian Airlines wants to welcome the new destination in its route network. In order to pay respect, the lettering is also shown in traditional Chinese characters combined with Hong Kong’s flag. The flag represents a stylized, white, five-petal Bauhinia-blossom, which is especially found in Hong Kong.

Austrian Airlines will offer flights to Hong Kong throughout the entire year. The duration of flights from Vienna to Hong Kong at a distance of more than 8,700 km is about 11 hours 25 minutes.