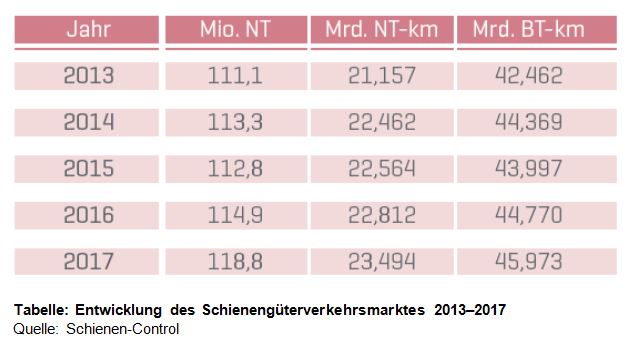 The growth was achieved by both, the competitors and by Rail Cargo Austria (RCA), with the former achieving higher growth rates. As a result, the market share of competitors rose to 30.2 per cent (revenue) and 26.9 per cent (traffic). This is clear from the annual report 2017 of the railway regulator Schienen-Control, which was presented to the public on 5 July.

“In freight traffic, competition has intensified and competitors of Rail Cargo have been able to increase their performance. Their market share increased in volume (net tonnes) from 29.1 per cent in the previous year to 30.2 per cent. But even in terms of traffic (net tonne-kilometers), the market share rose by 0.8 percentage points from 26.1 per cent to 26.9 per cent year-on-year,” Maria-Theresia Röhsler, Managing Director Rail Control, quoted from the 2017 Annual Report.

From a total of 36 railway companies operating in freight transport, five have a market share of 2.5 per cent and more, the other companies have shares of less than 1.6 per cent.  Lokomotion accounted for the lion’s share of freight volume and traffic volume in 2017 among the competitors, followed by TX Logistik Austria (TXL) with around 4 per cent, LTE and Cargo Service (CargoServ) at 3.5 to 4 per cent. Wiener Lokalbahnen Cargo (WLC) follows with around 2.5 per cent.

The main focus of the competition is on the Brenner corridor and on the Danube corridor: On these two routes, the competitors handled around 40 per cent and around 35 per cent of the total freight traffic, respectively. However, as in the entire Austrian freight traffic, they were able to expand their position almost exclusively by block train connections, where their market share in Austria is at 38 per cent. However, more than 99 per cent of single car transport that is relevant for modal split is still provided by ÖBB, or by Rail Cargo Austria.