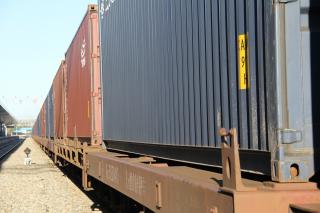 A new route of Changsha – Europe is launched by FELB as a member of UTLC. After a 6 month trial period, at the end of September the first full test train was dispatched from Changsha to Hamburg, followed by a regular weekly departure from the middle of October. Eastbound connection from Europe to Changsha will finally start after Chinese New Year, in 2016.
This project will be operated via the Northern route of the Transsiberian Railway, crossing the Chinese / Russian border at Manzhouli/Zabaikalsk, going further to Brest/Malaszewicze. Upon arrival to Malaszewicze the transport will then continue on block trains to Hamburg with the possibility to dispatch individual containers to other terminals in Central Europe, on request.
The new connection will have an impact on central and coastal provinces such as Guangdong, Anhui and Jiangsu, which are located in the vicinity of Changsha. These are the regions with one of the highest GDP per capita, low duties and income tax, and major points of interest for foreign manufacturers. The predominant industries in this area are microelectronics, electrical equipment, metallurgy and textile.
Consequently, the new connection will serve the growing demand of this prospering region for a reliable passageway to Europe. As FELB already provides wide-ranging service in the Northern provinces, where automotive industries are prevalent, the company continues its expansion into China.
With a transit time of 16 days for this connection, FELB yet again offers a competitive solution for customers who prioritize minimal transit time, smooth passage through customs and fair rates. Minimizing transit time has always been a priority of the company and due to that it is considered to be the unparalleled partner.
www.felb.world