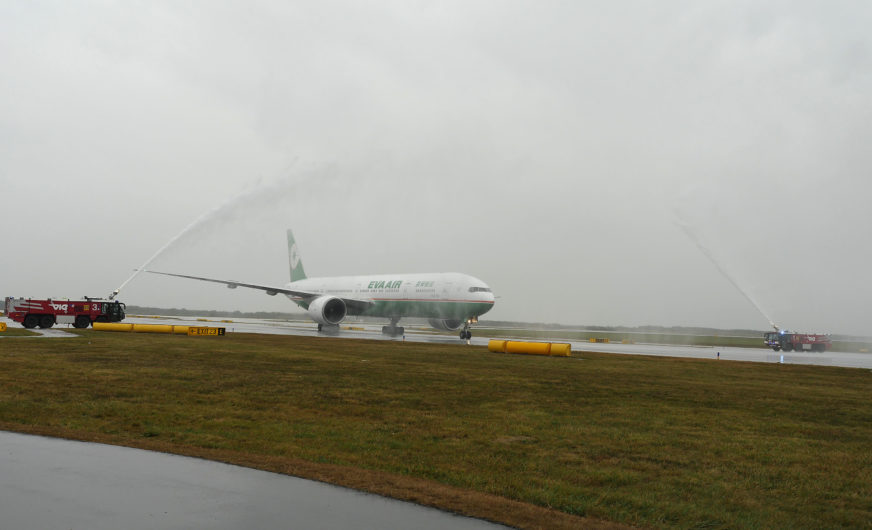 With a water salute the Vienna Airport has welcomed the Boeing 777-300ER of the private Taiwanese airline Eva Air on 4 October. The new aircraft is now flying on the Vienna – Bangkok – Taipei route and thus replacing the Airbus A330-200.

Eva Air continues with four weekly flights – Tuesday, Wednesday, Friday and Sunday – from Vienna via Bangkok to Taipei. Departure is always at 19:35 with arrival the next day at 11:00 morning in Bangkok or at 17:00 in Taipei, respectively. The return flights are on Monday, Tuesday, Thursday, Saturday at 23:40 from Taipei via Bangkok, arriving the next day at 9:40 in Vienna.

The private Taiwanese airline Eva Air is Star Alliance Member and was founded in 1989 as a sister company of Evergreen Marine Corporation, one of the world’s largest container shipping companies established in Taipei. Today the airline serves more than 60 destinations on four continents (Asia, Australia, Europe and America) using 74 aircraft of Boeing and Airbus. The B777-300ER forms the spine of Eva Air’s long haul fleet of 26 aircraft; 10 more are on order.

In 2016 Eva Air celebrates its 25th anniversary: On July 1, 1991, the first flight took off to Bangkok. Vienna was the first European destination in the network of the airline in November 1991.