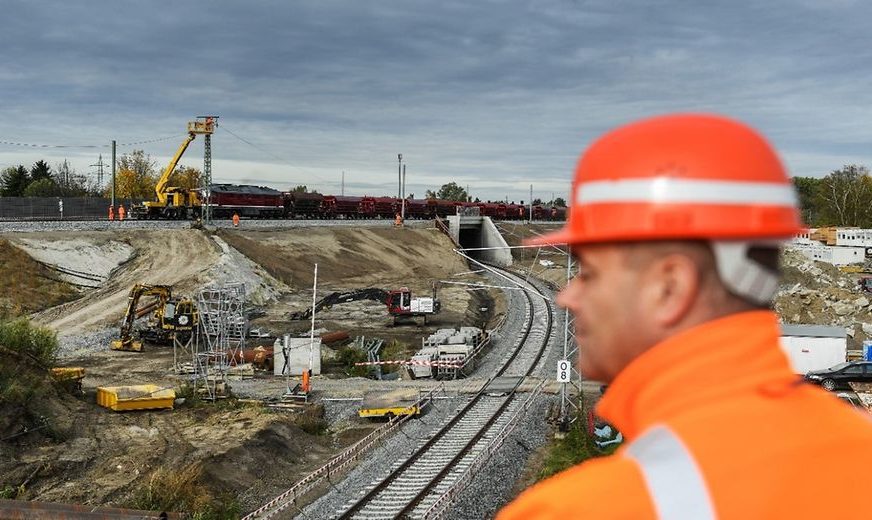 This year Deutsche Bahn (DB) will renew around 1,800 kilometers of track and more than 1,900 switches, and modernise 160 bridges. Construction work is underway at over 800 stations and stations – from weather houses to improving accessibility and customer information to general refurbishment. A total of around EUR 1.6 billion is being invested in the stations alone. This was announced to journalists in Berlin on 29 January by DB Infrastructure Director Ronald Pofalla.

The major construction sites in 2020: -) Between April and October, DB will renew around 190 kilometres of track and 54 points on the high-speed line between Mannheim and Stuttgart.
-) Eleven major projects will be launched, such as the MegaHub in Lehrte and the electrification of the upgraded Munich-Lindau line.
-) 46 major projects are still under construction, including the new Wendlingen-Ulm line, the upgraded Oldenburg-Wilhelmshaven line, the new Karlsruhe-Basel line and the electrification of the Ulm-Friedrichshafen southern line.
-) 18 ground-breaking ceremonies are planned, for example for the further ETCS extension on the Rhine-Alpine corridor and for the stations Rostock-Bramow or Wünsdorf.
-)  In addition to numerous small and medium-sized stations, DB is modernising the main stations in Dortmund and Hanover and Berlin Zoologischer Garten.

The budgets and areas:
-) Around EUR 5.4 billion from the performance and financing agreement will be invested in the existing railway infrastructure – mainly in tracks, switches, signalling systems, bridges and stations. -) EUR 2.2 billion will be used to finance expansion and new construction.
-) Another EUR 2.2 billion come from budgets such as the Municipal Transport Financing Act (GVFG), the Railway Crossing Act and special federal programmes.
-) DB uses EUR 2.4 billion of its own funds for maintenance.

With its Strong Rail strategy, DB is preparing for the demands of the next years. In addition to increased  capacity in terms of vehicles and personnel, the main goal is to develop the highly used railway infrastructure. In doing so, DB relies on continuous modernisation of the rail network, stations and energy facilities.

At the same time, the infrastructure is being made more robust against disruptions and work is being carried out with the industry to get a better grip on the tension between “driving and building”. In the medium to long term, the expansion and new construction of lines and junctions and Digital Rail Germany will create more space on the rail network.