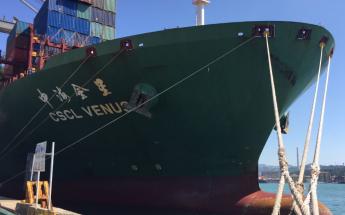 At the end of August, the China Shipping Container Lines (CSCL) owned m/v CSCL Venus became the largest ever unit to date to have ever called at an Italian port. With a nominal capacity of 14,300 TEUs and a length overall of 366.10 meters, m/v CSCL Venus is the first of two ULCCs to be deployed in the service AMX1/AMC1 in 2015 and having La Spezia Container Terminal as the first port of call in the service rotation, ensuring highly competitive and fast transit times from Asia to the Italian market.
For this special occasion, the La Spezia System extended a warm welcome to a China Shipping Italy Agency delegation, led by Qi Angela Shi (Managing Director), Gianfranco Gazzolo (General Manager), Roberto Terebinti (Operation Manager), in greeting the arrival of the m/v CSCL Venus’ on her maiden call.
“The berthing of this giant of the seas – enthused Qi Angela Shi – is an important milestone for CSCL. It is tangible evidence of our commitment to the Italian market, enabling China Shipping to continue to serve the needs of our customers. I am happy to witness an eclectic mix of East and West , as we, China Shipping deploy one of our largest ships here in Italy, to be operated by new 23 rows gantry cranes also built in China. “
Gianfranco Gazzolo, explaining how the partnership between China Shipping Container Lines and La Spezia Container Terminal has evolved over the course of recent years, added: “The size of the ships deployed in our Asian service has grown: in 2009 we operated ships in the range of 5,600 TEUs in nominal capacity, then in 2012 a big step to 8,500 TEUs, 9,500 TEUs in 2013 and today we are here, welcoming a 14,300 TEUs giant. In all cases, we are responding to the demand in further developing both on the Asia – Med trade lane, and also with connections between Italy and United States East Coast ports, managed with the MAX2 service.”
www.contshipitalia.com