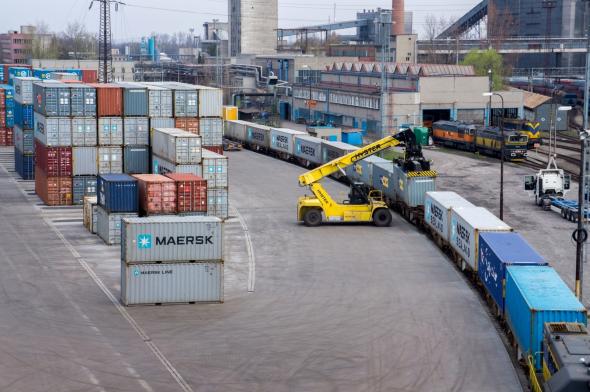 Signing a grant agreement with the  Innovation and Networks Executive Agency (INEA) of the European commission was the culmination of efforts by AWT, a member of the PKP Cargogroup, to acquire the biggest grant ever in the history of the company. The rail transport company is paying great attention to the development of the Paskov terminal, which in the future should should become the main hub to southern Europe.

AWT has made use of the potential of its parent company PKP Cargo to establish long-term focus on developing intermodal transport and has likewise expended great effort in modernizing and expanding the Ostrava-Paskov terminal, which is one of the main transshipment depots in central Europe.

“AWT has had long-term experience with intermodal transport, we see potential for our growth in this segment, and we are devoting a lot of attention to the terminal in Paskov. This transshipment depot has a strategic and prospective position within Europe. Today it joins 25 terminals and depots in Poland and is linked up to major European ports. Together with PKP Cargo, we hope to get it more involved in the logistics triangle of the Adriatic-Baltic-North Sea or as an operator on the Silk Road. For the entire PKP Cargo group, it represents primarily a gateway to southern Europe,” says Arkadiusz Olewnik, the CEO of AWT Group.

CEF (Connecting Europe Facility) was used to support the preparation and construction of phase III of the multimodal container terminal in Paskov, of which AWT contributed EUR 5.87 million. This amount (approximately 158,500,000 CZK) represents 66 per cent of the eligible costs of the project, which in addition to new rail links, handling areas, lighting and other equipment at the terminal, also includes the study, project and reconstruction of siding in Paskov.

“The goal of the project is to maximize the use of the 700 meters long rail yard, allowing us to offer a new standard of shipping and handling for our customers while saving costs on siding operations,” says Viktor Bystrian, the sales manager of AWT.

The construction and technological completion phase follows for the thoroughly modernized Paskov terminal. By the end of 2020, a new rail link should be built, the siding station reconstructed, and the depot expanded to more than double its size, with the shipping and handling areas encompassing 71,000 sq. m. and the transport output growing to nearly 5,000 TEUs. The modifications carried out will speed up transit through stations on branches running to the terminal.

The Paskov terminal currently covers 31,000 sq. m. and has a capacity of 2,400 TEUs with 3 x 270 meters tracks. It lies in vicinity of industrial zones on the border with Poland and Slovakia. Its strategic position in the heart of Europe makes it fast and easy to connect it to key European ports and terminals. It is located close to the highway and is connected to the nationwide railway network.

The terminal is used for both AWT and external entities and takes care of all activities associated with handling, collection, distribution, and light repair of containers, clearing trains and storage containers on site, and customs services for local customs situated on the premises of the terminal. AWT has container equipment at this terminal that can stack containers up to five layers high and handle not only ordinary ISO containers, but also truck trailers and exchangeable boxes. It also has tractors for moving around containers and trailers.

The AWT Group, member of the PKP Cargo Group, is one of the largest providers of rail transport services in Europe. It provides comprehensive solutions mainly to large industrial companies in Central and Eastern Europe, primarily transporting commodities such as coal and steel, and components for the automobile industry. AWT has an extensive fleet of rolling stock, with more than 160 locomotives and 5,100 freight wagons. In the Czech Republic, it owns the rapidly growing Ostrava-Paskov combined transport terminal, operates more than 60 rail sidings and owns over 400 kilometers of track. It employs more than 2,100 people.