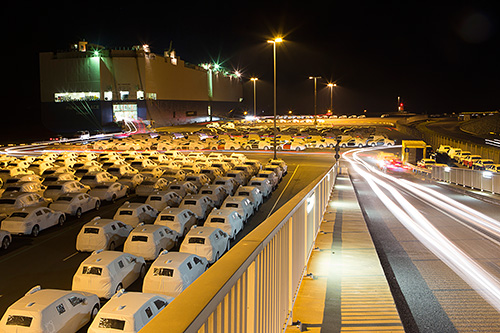 The port of Emden was able to continue the rising trend of vehicle throughput. For the first time, more than 700,000 vehicles were handled in the first half of the year. This means new car throughput grew by roughly 6 per cent year-on-year. This beats expectations and lets expect new record volumes.
This positive result can be drawn to the still strong export figures. The U.S. was the market with the strongest increase in 2015. The destination with the biggest turnover has still been the UK, on a stable level. However, also imports, in particular from the Iberian Peninsula and South Africa, show a positive trend. Thus also the outlook for the total year is positive, a further rising throughput is expected. Hence the port of Emden expects throughput figures of about 1.38 million vehicles. This would be a more than 5 per cent-increase on the record year of 2014.
The Autoport Emden sees its continuous expansion of the infrastructure as a key to success. On a working day roughly 6,000 vehicles are handled in the port of Emden. To be able to handle the continuously rising volume, investments into port facilities are indispensable. The provincial government of Lower Saxony and Niedersachsen Ports are currently planning to close the gap with a new berth for large vessels.
With this positive trend the adjustment of the navigation channel of the river Ems is becoming increasingly important for the port of Emden, with regard to securing competitiveness also in the future. What has developed visibly, was the completion of the dolphin berth. The aim is to use the back ramp system with the end of this year.
www.seaports.de