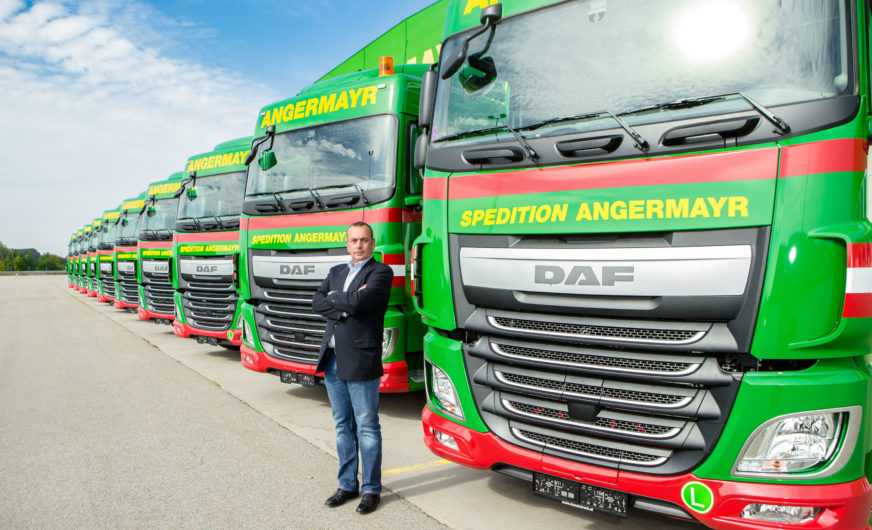 Angermayr, a transport company from Upper Austria, has just received 42 brand new DAF trailers from the utility vehicle company DanubeTruck. These include six special, weight-optimised vehicles. Weighing 6.7 tonnes, they are suitable for heavy haulage such as liquid aluminium, which is a speciality of the logistics company. In total Angermayr has a fleet of 124 vehicles (including 113 DAF), which carries 40,000 goods shipments per year, covering about 18 million kilometres on European motorways and main roads.
In addition to the reliability of DAF vehicles, the economy and the proximity to the DanubeTruck service station in Ried were main reasons for the acquisition of the modern tractors,” explains Eyke Angermayr, heading the family enterprise based in Innviertel, Upper Austria already in the third generation. “With a fuel consumption of 29.9 liters and operating costs of only 64 cents per kilometre, the DAF trucks delivered by DanubeTruck count among the most economic trucks in the environmentally-friendly Euro 6-class. In addition, our drivers will benefit from the exclusive equipment and of a particularly quiet driver cabin,” she adds.
The DAF vehicles of DanubeTruck, with engine power of 460 PS (10.8 litres Paccar MX-11), covering about 150,000 kilometres per year with Angermayr, are deployed in Austrian goods transport as well as on international routes – mainly in the Netherlands, Belgium, Germany, Switzerland and Italy. All vehicles are equipped with modern safety and assistance systems, as well as a GPS controlled cruise control.
www.angermayr.at  www.danubetruck.at