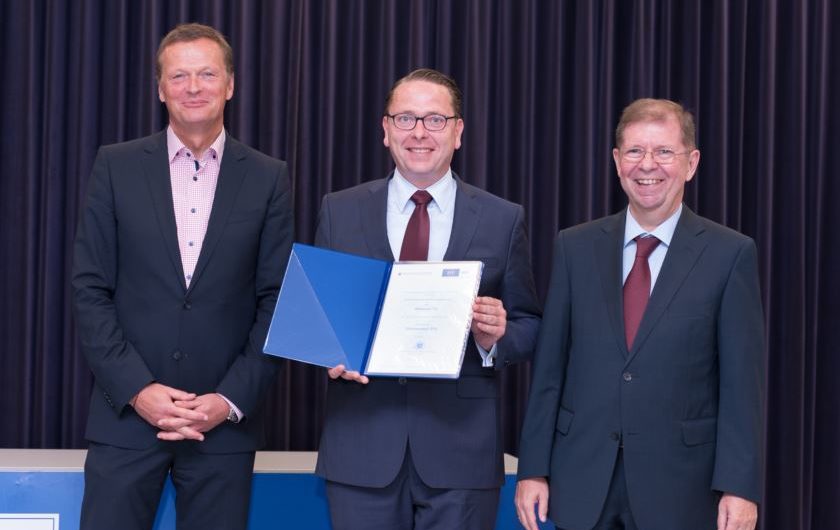 Alexander Till, Representative of Port of Hamburg Marketing (HHM) in Austria for nine years, has been awarded the title of Honorary Senator for his many years at the University of Applied Sciences of the BFI Vocational Training Institute in Vienna . Dr. Andreas Breinbauer, Rektor and Dr. Helmut Holzinger, Managing Director of the University of Applied Sciences presented the award at an academic ceremony.

Since 2008, Alexander Till has been part time working at the University of Applied Sciences. Since 2011 he is giving lecture of maritime navigation. Also previously he had been giving guest lectures to the students. The Honorary Senator title is based on the consistently excellent review of his teaching in an internal and anonymous evaluation by the students, but also on his efforts to bring the students in contact with the shipping industry at an early stage. Several times in recent years, he initiated excursions to the Port of Vienna or to companies such as Opel, thus enriching the “theoretical cramming of teaching content” to give important insights into practice.

“The Honorary Senator title from the BFI University of Applied Sciences is a great honor, because I really attach great importance to the training of qualified young people for Austria’s transport and logistics industry. Students benefit from my main occupation as representative manager of Port of Hamburg Marketing in Austria, because the association appreciates my work with the students, and I can convey many contacts through the extensive network of the association,” said Alexander Till.