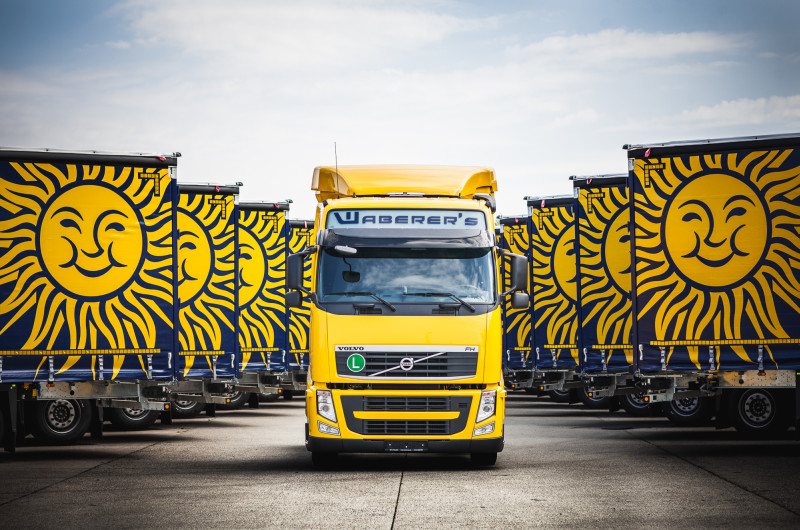 On average, the vehicles of Waberer’s International regularly load at 6,500 sites in Germany and perform on average 2,400 loadings weekly in the country in order to deliver German goods to their respective markets in the European Union. In 2015, more than 2 million tonnes of goods were delivered through Waberer’s International’s transportation and forwarding activities from/to points in Germany and other countries within the European Union.

Waberer’s International’s truck-trailers completed 90 million kilometres on the road in Germany in 2015. This is approximately 24 per cent of the total annual mileage of the entire fleet of Waberer’s International for 2015 performed on the roads of Europe. The revenue attributable to German customers and German destinations grew by about 18 percent as compared to 2014.

The freight commissions from Germany to other European countries are typically performed for global enterprises in the automotive industry, household electronics, fast moving consumer goods (FMCG) and cosmetics. Waberer’s International primarily transports automobile parts, paper goods, electrical installation materials and window products to destinations in various European countries. A part of freight commissions from Hungary to Germany are products manufactured by Hungarian plants of international companies, such as products of Bosch and Audi.

“Large German enterprises and manufacturers in the supply chain have been our satisfied customers for decades”, says Ferenc Lajkó, deputy CEO for transportation and forwarding, on the occasion of the inauguration of the Cologne subsidiary. “Our newly established German subsidiary will help us further improve the quality of service provided to our customers”, he adds. “We have assigned the leadership of our German enterprise to a local expert who has decades of experience with the largest logistics companies in Germany.”

Waberer’s Deutschland GmbH Director Sales and Business Development Andrea Heinz stated in this respect: “We will do our best to deliver on the high expectations of our cost-sensitive German customers as fully as possible. Our efforts are supported by the huge capacity of Waberer’s International’s fleet of approximately 3,500 own asset truck-trailers. We will make sure to be able to arrive at any loading point in Germany within 12 hours, even with as many as 100 truck-trailers, if our clients require”.