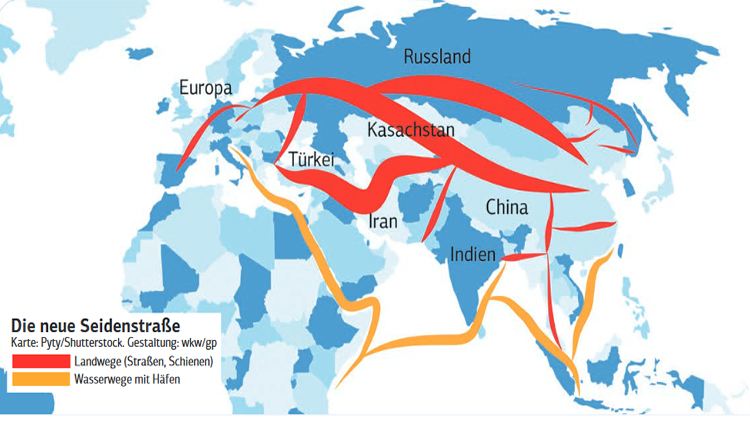 The largest infrastructure project in human history, the “belt and road initiative” or “New Silk Road” is taking concrete shape. Every month not only new projects are started, but also completed projects are put into operation.

The best example is the world’s largest dry port in Khorgos on the Kazakh-Chinese border. This is where freight trains to Europe are being transhipped daily from the Chinese standard gauge to the Russian wide gauge and sent on their westbound journey.

“While cargo volume along the corridors of the ‘New Silk Road’ rises fom month to month, Austria is still standing on the grandstand. At some point, however, the opportunity for Austria to enter this business will be over – the cargo traffic will have found other routes to Europe, bypassing Austria,” says Alexander Biach, Deputy Director of the Vienna Chamber of Commerce, pointing out the reason to connect to the transport magistral.

For him, the right approach is to bring the broad gauge railway closer to the Vienna area. Its current end os in Kosice, in Eastern Slovakia: “With the broad gauge continuing to Vienna, we can ensure our hub function for the Central and Eastern European region, which we have conquered since the fall of the Iron Curtain, in the long term. Without this connection to the New Silk Road, the hub Vienna will be at risk”.

The Vienna Chamber of Commerce is supporting the rapprochement with the “New Silk Road”. They are now preparing to join the global association of Chamber 6 (C6), which currently consists of the chambers of the cities of Beijing, Berlin, London, Paris, Moscow and San Paulo. These work together on concepts for urban development, trade, export promotion, training and positioning of the respective business locations.

The C6 hold an annual meeting to discuss these issues. This year’s meeting, when the Vienna Chamber of Commerce will officially join the association, will take place in Beijing at the beginning of May. One of the key topics of this year’s C6 conference will be the opportunities offered by the New Silk Road.