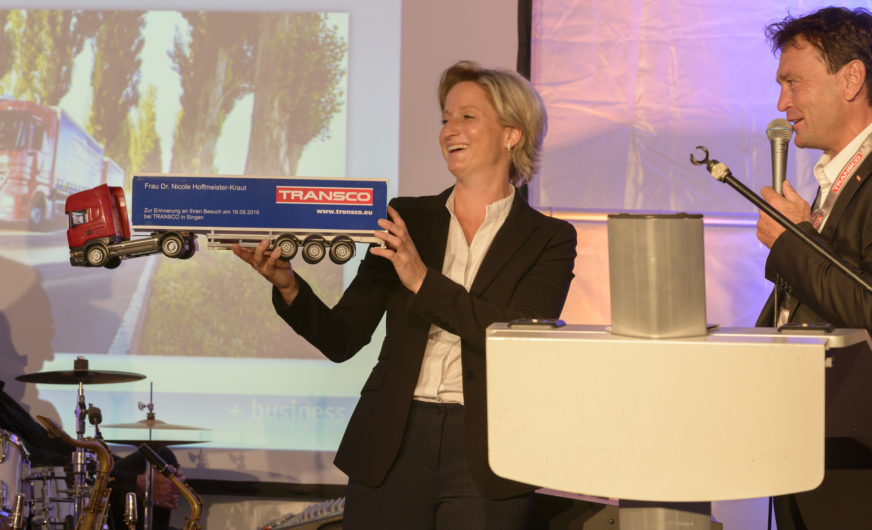 On September 16, the medium-sized logistics group Transco celebrated the official opening of its expanded and modernised headquarters in Singen am Hohentwiel. Among the 100 guests there was also Dr. Nicole Hoffmeister-Kraut, Baden-Württemberg’s State Minister of Economy, Labour and Housing.

Transco had moved the headquarters of the company and the transport hub from Konstanz to Singen three years ago. The shipping facility in Singen was modernised and expanded for a cost of EUR 5 million, including two additional floors for the administrational building.

When it comes to transport accessibility, the Singen site is better developed than Konstanz, allows for further growth and is also located closer to the logistics location of Gottmadingen. This is where Transco operates a 65,000 m² logistics facility – the largest in the Lake Constance area – and stores, among other things, one million rims for an automotive supplier. Shifting the transport hub from Constance to Singen, also eliminates the need to transport an annual 11,000 tonnes of goods by shuttles on the congested B33 motorway.

Transco employs around 200 persons in Singen. The entire medium-sized group has 550 employees. On the one hand Singen is the administrative center of 20 branches and affiliates in eight countries, and on the other hand the most important transport hub. In 2015 the Transco group achieved a turnover of EUR 110 million and as the managing partner Christian Bücheler stressed at the ceremony, paid “just over EUR 2 million in toll and EUR 3 million from petroleum tax.”

With 25 daily departures from Singen, Transco is particularly strong on routes to Italy. The crossing of the Alps is mainly effected on the railway. The second most important destination for international traffic is the United Kingdom, another focus of the company is on Eastern Europe. In short distance traffic, Transco covers the entire German and Swiss Lake Constance region.

As a result of the financial sanctions imposed by the EU on Russia, this business has become difficult. Transco is therefore planning to enter new markets in land transport, such as Iran and also to expand its airfreight activities in pharmaceutical forwarding.