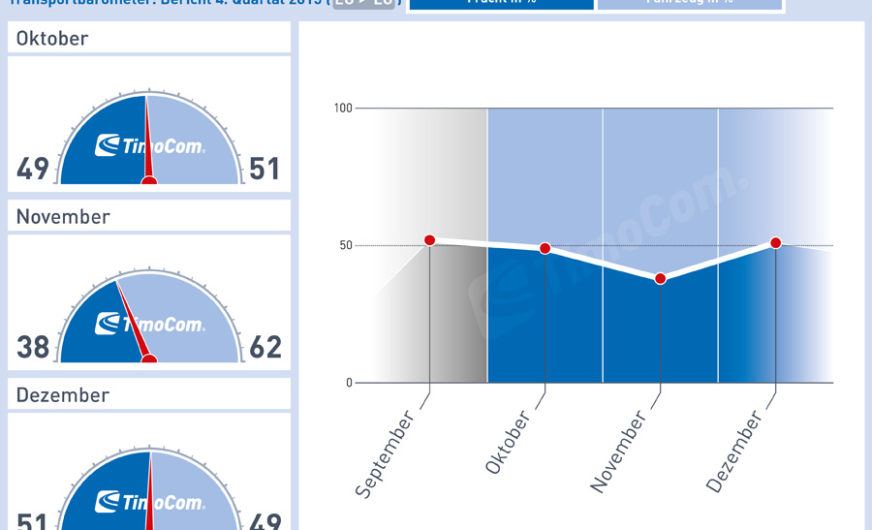 Weak economic data in Europe, refugee crisis, pessimistic shippers – the business climate has clearly cooled down towards the end of the year, also showing an impact on TimoCom’s transport barometer. The ratio of cargo to capacity was 46:54 during the last three months of 2015, thus remaining below expectations.
In October the European transport market had still been able to maintain the momentum from summer. At a ratio of cargo to capacity of 49:51 this month was slightly above last year’s figure (48:52 in 2014).
What was particularly striking: The “normal” decline in freight volume from September to October this year was by far not as strong as in previous years. In 2013 and 2014 the cargo share dropped by five percentage points in this period; in 2015 it was only three percentage points.
In November cargo volume was down fiercely. The cargo share in the European transport market lost eleven percentage points – the sharpest decline between two months since 2011. At the end of November the ratio of cargo to capacity was 38:62. In the last quarterly report, Marcel Frings, Chief Representative TimoCom had considered November as a particularly rich month for cargo, and prognosticated a cargo share over 50 per cent: In fact, the exact opposite has occurred.
However, this year customers, producers and transport service providers had a delay in Christmas business, which had a positive effect on December results: In the final month the transport barometer got out the most once again, rising by 13 percentage points regarding the cargo share. There has never been such a finish since the transport barometer started collecting data. Thanks to this effort the month of December was closed with a slight surplus of cargo (51:49).
The final report for the year 2015 shows a ratio of cargo to capacity of 47:53, which is two percentage points above last year (45:55). All quarterly reports of the year show cargo shares above last year’s figures.
The outlook for 2016 is moderately positive. Terrorist attacks and the overall increased threat of terrorism, the increasing number of security checkpoints and refugee issues – these are points that may have a direct impact on the European economy.
TimoCom’s transport barometer displays the current situation within the European transport and logistics sector. With its help planners can evaluate the actual freight and vehicle situation in other countries from their office. Thus, companies can react better to price fluctuations and better plan their scheduling.
www.timocom.com