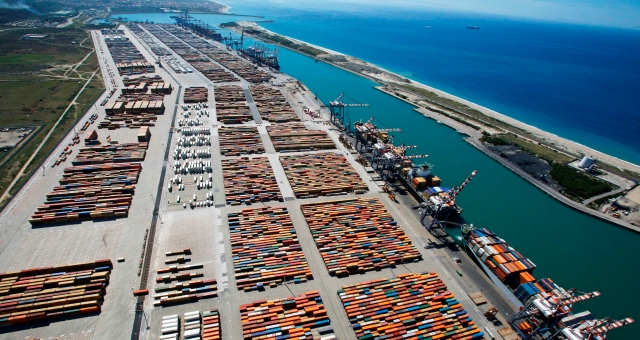 Green light for the new intermodal terminal at the port of Gioia Tauro, with the signing of the contract between the Special Commissioner Andrea Agostinelli and Sebastiano Grasso, Vice President of Contship Italia Group and Managing Director of Sogemar, the winner of the international tender for the construction and the thirty-year concession of the new rail gateway.

The tender is one of the works included in the Triennial Operational Plan, and foresees a total funding of EUR 40 million. With the construction of the terminal, Gioia Tauro aims to develop the gateway traffic, integrating itself with the trans-European axis of the TEN-T Corridor number 5, which will unfold between Helsinki and La Valletta.

The new rail gateway will take up an area of 325,000 square meters. Built between the towns of Gioia Tauro and San Ferdinando. The new tracks will be 3,825 meters long, 2,761m within the container terminal area and 1,064m within the intermodal terminal.

A rail connection to the warehouses is also included in the project, to allow the loading and unloading of wagons, and the inclusion of switches on the three existing tracks, to enable the independent use each individual track.

The new infrastructure will have a strategic value: it will allow the port to intercept a portion of the traffic between the Far East and Europe (in many cases currently routed through the ports of Rotterdam and Antwerp), further developing the Southern Gateway option, which offers the Italian ports as an alternative to the Northern European hubs for volumes directed in Switzerland and southern Germany.

The goal is to increase the use of the railway, reducing transit times, transport costs and environmental pollution of the road transport system, maximizing at the same time the economic and territorial impact of the logistics system as a whole.