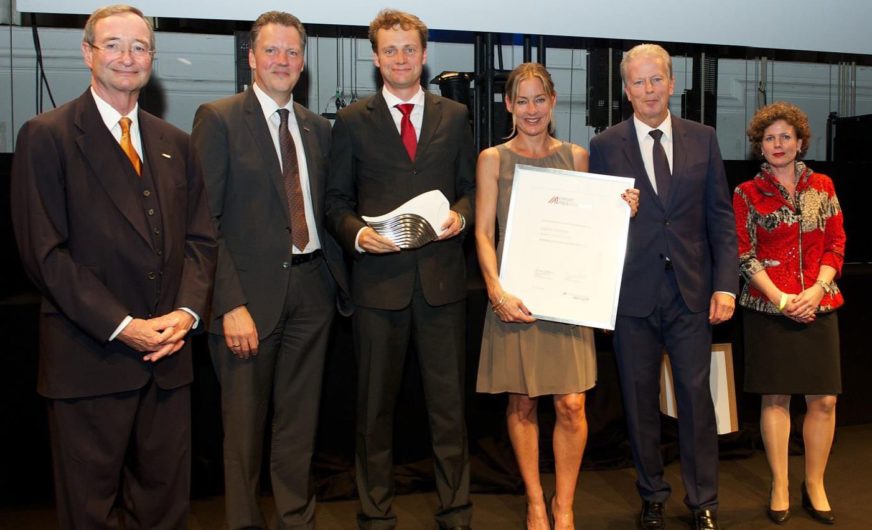 The freight forwarder Condor was the only successful Salzburg-based company with the 2016 Austrian Export Award : On June 21, during the “Exporters’ Nite” at Vienna’s Museumsquartier, Vice Chancellor Reinhold Mitterlehner and Christoph Leitl, President of the Austrian Chamber of Commerce handed over the 2nd prize in the category of transportation to the company’s Managing Director Andreas Gfrerer.
The Austrian Export Award is organized by the Austrian Economic Chamber. President Christoph Leitl: “Exporters’ Nite Austria’s puts top exporters into the focus, and our Export Awards acknowledge their above-average commitment and success on international markets. Exportation is and will be the engine of Austrian prosperity. With their commitment Austrian exporters ensure recovery, growth and jobs in the country.”
The economy needs reliable partners, also in politically challenging times. So we deliberately expanded our Russian expertise and are able to organise very exciting transports for major clients: On behalf of the Austrian football association ÖFB, we carried the Austrian national soccer team’s equipment to a match in Moscow. We also transported a historic Bösendorfer piano from Vienna to St. Petersburg. A very interesting job from the logistical perspective was to carry the lift components for the Winter Olympics to Sochi on behalf of Doppelmayr and according to an exactly staged plan,” says Condor Manager Andreas Gfrerer.
Last year their reputable new customers included – apart from the ÖFB – the companies Hewlett-Packard, Audi, Red Bull, Renault and Danone. Condor has evolved from the a pure forwarder to a consultant and problem solver for complex transport tasks with a focus on Russia and all countries of the CIS.
Headquartered in Salzburg, the company operates a total of five sites in Austria, Switzerland, France and Russia. Total revenues in the previous year were about EUR 19 million. Condor employs a total of 41 persons from eleven nations, speaking five different mother tongues. The company was able to increase its export share to 86 percent in 2015. The key markets include Russia and the CIS, as well as Eastern Europe, the Balkans and the Middle East.
The complex conditions make Russia already a quite preoccupying market, but we decided to consolidate our activities in Iran as well. Given the current geopolitical situation, we can now benefit from our long-established expertise in Iran, that we have been collecting already for decades. In Iran we generate indeed only two percent of our turnover, but I am convinced that there is more potential,” Andreas Gfrerer illustrates his ideas of expansion.
www.condor.co.at