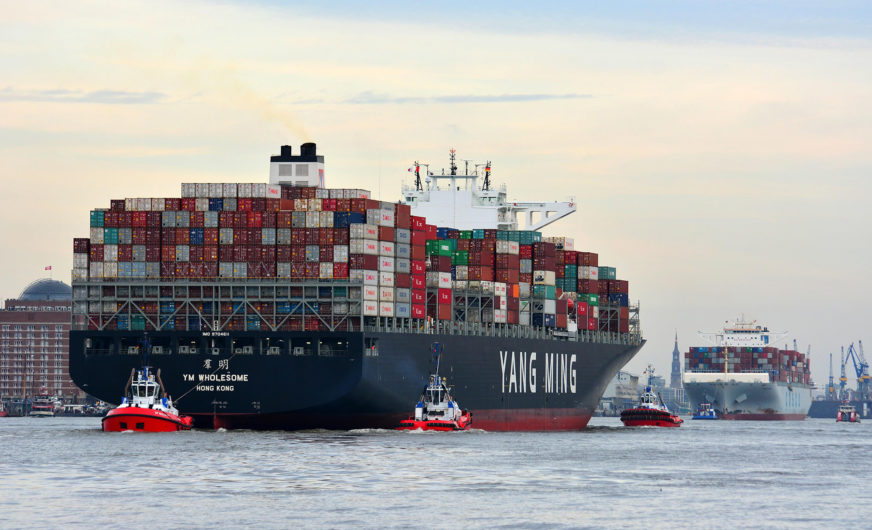 Hamburg as Germany’s largest universal port clearly felt the effects of weakness in Chinese foreign trade plus the steep downturn in trade with Russia during the first nine months of the year. Totalling 104.6 million tons, seaborne cargo throughput in Hamburg was 4.8 per cent lower than last year.
Even if bulk cargo handling in the first three quarters totalled 34.3 million tons and was therefore once again substantially higher, being up
8.7 per cent, this could not fully offset the decline in general cargo throughput. Container throughput in the first nine months totalled 6.7 million TEU (20-ft standard containers), down by 9.2 per cent. It proved impossible to maintain the previous year’s strong growth.
The downward trend in container traffic with Russia appears to have ceased and stability to be setting in. In the first nine months, at
323,000 TEU handling of boxes for Hamburg’s third most important partner for container traffic was down by 36 per cent. Along with a weak rouble, the low oil price and the generally continuing economic recession in Russia were the main causes of the fall apparent in container throughput.
“The downturn of container traffic with Russia of the order of more than one-third hit us especially hard because the bulk of all containers were transhipment containers that were loaded on to, or discharged from oceangoing containerships. This second step in handling per box and per direction of transport from feedership on to the oceangoing containership or the reverse is now only occurring to a much lesser extent, a fact also reflected in the overall statistics for containers handled in Hamburg. A recovery can hardly be expected in the near future. We assume that container throughput with Russia is now stabilizing and that perhaps the first signs of an upward trend will be apparent next year,” said Axel Mattern, Executive Board Member of Port of Hamburg Marketing (HHM).
At the Port of Hamburg’s quarterly press conference, HHM CEOs Axel Mattern and Ingo Egloff emphasized that apart from the downturn in the Russia trade, the weak throughput trend on container traffic with China had strongly influenced total throughput for the first nine months. Container throughput with China of 1.9 million TEU in this period represented a fall of 14.9 per cent. In the months of August and September, the jump in volume otherwise caused by supplies for the Christmas trade almost completely failed to materialize.
www.hafen-hamburg.de