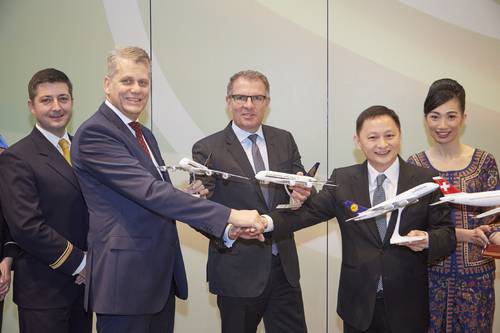 Singapore Airlines (SIA) and Lufthansa have signed a wide-ranging partnership agreement that will see the two airline groups operating key routes between Singapore and Europe on a joint-venture basis, in addition to significantly expanding codeshare ties and deepening commercial co-operation.
Flights between Singapore and both Frankfurt and Munich, as well as flights between Singapore and Zurich, are to be operated under revenue-sharing arrangements. New SIA-operated flights between Singapore and Düsseldorf, which are to be launched in July 2016, will also be covered under such arrangements.
The two airline groups also intend to co-operate in key markets in Europe, Southeast Asia and Australia, co-ordinating schedules to provide customers more convenient connections between route networks, offering joint fare promotions, aligning corporate programmes to strengthen the proposition to corporate customers, and exploring enhancements to existing frequent-flyer programme ties.
In addition to SIA and Lufthansa, the agreement includes SIA subsidiary SilkAir, and Lufthansa subsidiaries Austrian Airlines and Swiss.
The expanded codeshare ties will provide SIA customers with convenient access to and from points in Austria, Belgium, Germany and Switzerland, via the transfer hubs of Frankfurt, Munich and Zurich, with more than 20 new codeshare routes. Lufthansa and Swiss will in turn codeshare with SIA and regional arm SilkAir on more routes serving destinations in Southeast Asia and the Southwest Pacific. Codeshare co-operation is expected to be expanded to more destinations in future.
Some of the benefits of the agreement will be introduced in the coming months, such as the new codeshare services. Other elements of the agreement that require additional levels of regulatory approval may be implemented progressively through 2016.
“We are very pleased to have reached agreement for this extensive partnership, which will bring about significant benefits to consumers through enhanced connections and more codeshare destinations. Singapore Airlines has had longstanding ties to Lufthansa, which is an ideal partner with an excellent network and strong customer focus. This agreement deepens ties with the wider Lufthansa Group, providing a solid foundation for numerous commercial co-operation opportunities,” says Singapore Airlines CEO Goh Choon Phong.
Adds Carsten Spohr, Chairman of the Executive Board and CEO of Deutsche Lufthansa AG: “We can look back already on a long and fruitful partnership with Singapore Airlines. And we’re now intensifying this close collaboration between two world-leading premium air carriers with a new joint venture that is in the best interests of all our customers, in Europe and in Southeast Asia. Because by working even closer together, we can both offer even better connections and even better services.”
Mr Carsten Spohr continued: “Our intensified partnership with Singapore Airlines is an excellent addition to our global joint venture network, and is a cornerstone of our Asia Strategy. And all these strategic partnerships will help the Lufthansa Group further consolidate its leading position in all key markets.”
www.lufthansagroup.com  www.singaporeair.com