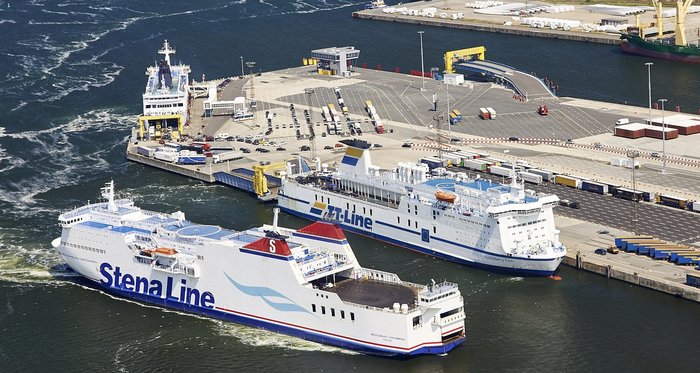 In the first six months of this year, 13 million gross tonnes of cargo were handled in the overseas port of Rostock, which is 800,000 tonnes less than in the same period of the previous year. The rolling freight of ferry and ro-ro traffic increased by seven per cent compared to the first half of 2017: from January to June 2018, 8.7 million tonnes crossed the quay edges of the ferry and ro-ro terminals. Ferry and ro-ro freight accounted for a share of 67 per cent of the total turnover in the universal port of Rostock in the first six months of this year.

This strong growth did not fully compensate for losses in the high tonnage sectors such as grain, coal and cement. One third of the total turnover, or 4.3 million tonnes, was achieved by handling bulk, liquid and general cargo.

However, the freight traffic of the ferry shipping company Stena Line on the route Rostock-Trelleborg is growing continuously. In 2017, revenue increased by three per cent, and this trend continues.

Apart from the classic trailer traffic, the demand for conventional rail transports and project loads is increasing. Starting in September, Stena Line is taking action on the new timetable on Rostock-Trelleborg, with the “FS Sassnitz” on selected days using another rail ferry on this route.

“Whether classic RoRo services throughout Europe, proven intermodal connections or Shipping Logistics – we can also ship what is being moved. The new timetable on the Rostock-Trelleborg route will once again increase the capacity for direct and sustainable train services to Sweden, thereby strengthening the Rostock location as a whole,” says Katrin Verner, Freight Commercial Manager Stena Line.