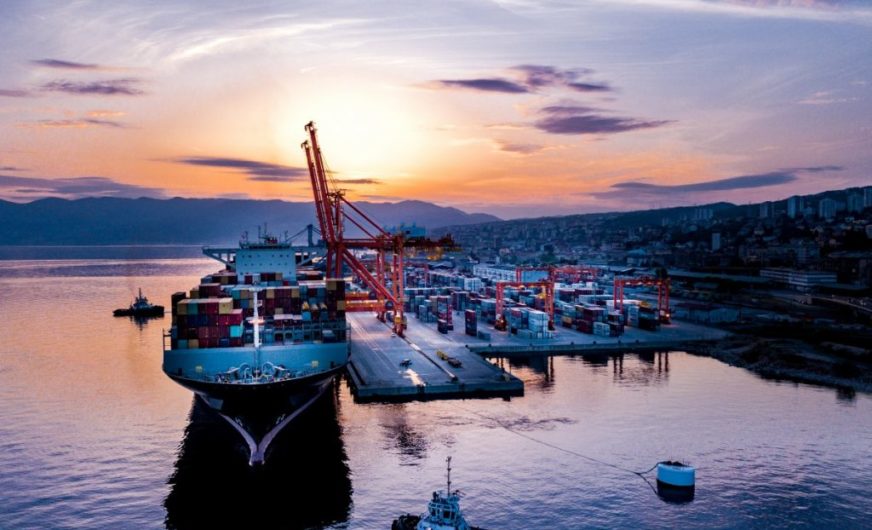 “Rijeka Land Sea Express” – a new maritime and intermodal service of the port of Rijeka to the countries of Central Europe was officially presented on 22 October at the Adriatic Gate container terminal operated by the Adriatic Gate Company (AGCT). The organizers of the new service are Cosco Shipping Lines, China’s largest and one of the world’s largest container shipping companies, and Ocean Rail Logistics, the company responsible for rail transportation within the Cosco Group.

The new intermodal service consists of a regular weekly shipping line connecting the Greek Piraeus, the main hub of Cosco Shipping Lines for the Mediterranean, with Rijeka and the line-coordinated railway services – block trains for container transport on the lines between Rijeka and Budapest, as well as Rijeka and Belgrade. Through “Rijeka’s Land Sea Express”, Cosco offers its clients 32-day travel requests from East China to Budapest and 28 days from South China to Budapest, connecting overseas and rail services and using Piraeus and Rijeka as transhipment ports.

The project started in March this year, with the joint work of Cosco Shipping Lines from China and Europe, and the companies Dragon Maritime, PEARL, Ocean Rail Logistics, Express, HZ Cargo, Rail Cargo Operator – Hungaria, BILK, Transagent and Adriatic Gate, and In the first three months alone, more than 3,500 containers were shipped through the Rijeka container terminal through the new service. Next year, at least 16,000 TEUs are expected to be delivered via the Rijeka Land Sea Express.

The ceremony was attended by Minister of the Sea, Transport and Infrastructure Oleg Butković, President of Cosco Shipping Lines for Europe Sun Jun, Executive Director of the Port of Rijeka Authority Denis Vukorepa, as well as representatives of the Adriatic Gate j.s.c., companies within the COSCO Group, and service providers on the Rijeka traffic route.

Croatia has initiated a number of projects at the port of Rijeka, the most significant of which is the construction of a new Zagreb Deep Sea container terminal, completed this year. The new terminal, with investments from a future concessionaire, will have the capacity of one million TEUs and the ability to accommodate the latest generation of container vessels.

Last year alone, Rijeka port had a growth of 20 percent of container traffic, with a 40 percent increase in container transportation by rail, with the share of total container transport from and to the port being 35 percent and continuing to grow, Denis Vukorepa said, concluding that the port authority shall continue to provide full support to this project and be available “24/7”.