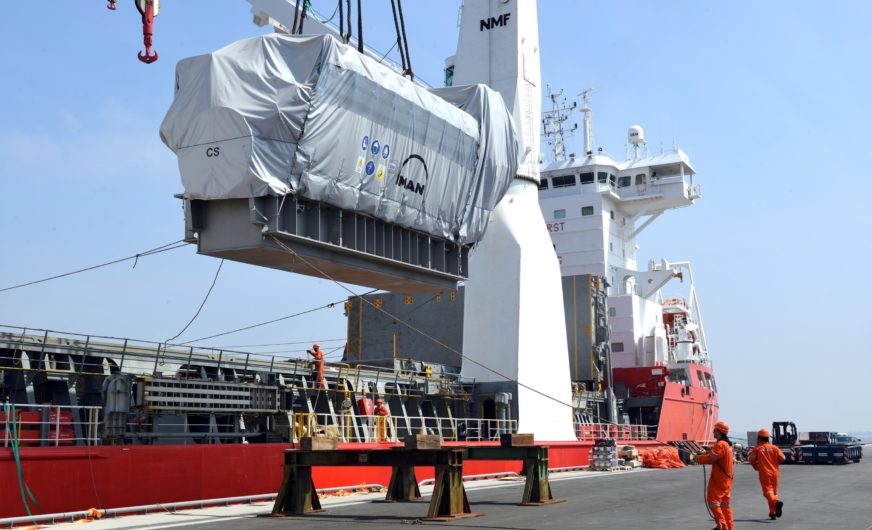 Rhenus Project Logistics is organising the transportation, handling and storage of 13 enormous MAN diesel engines and their fixtures as part of a complex project. After they were initially stored at the Cuxport terminal, the generators arrived in Turkey at the end of November. They will be used as a floating power station.

Rhenus Project Logistics launched the first part of the project in April, transporting the MAN 18V51/60 TS diesel engines – which are 15 metres long, 5 metres wide and almost 7 metres high – from their production site in Saint-Nazaire, France to Cuxhaven, Germany, where they were temporarily stored while Rhenus searched for a ship that could lift the heavy engines, each weighing 325 tonnes.

“Before we were able to ship the first engines to their place of deployment, they were initially stored at the Cuxport terminal in a building with sufficient ceiling height, protecting them from any moisture”, says Marcus Janowsky, Project Manager at Rhenus Project Logistics. The engines were loaded to self-propelled modular transporters (SPMT).

Six of the 13 generators then set off on board the “BBC Lagos” on their way to Tuzla in Turkey on 9 November. “The project is particularly important for us because it firstly demonstrates the excellent cooperation between the various companies and units within the Rhenus Group. Secondly, handling this large and bulky load by land and on water requires special sensitivity and very precise planning – which we were able to provide”, says Janowsky.

The generators arrived in Turkey at the end of November and have been installed on new Karpowerships. The remaining seven generators are due to be shipped during the next few months.

In total, Karpowership operates 22 floating power stations in more than ten different countries. According to the energy supplier, they meet the energy needs of about 34 million people.