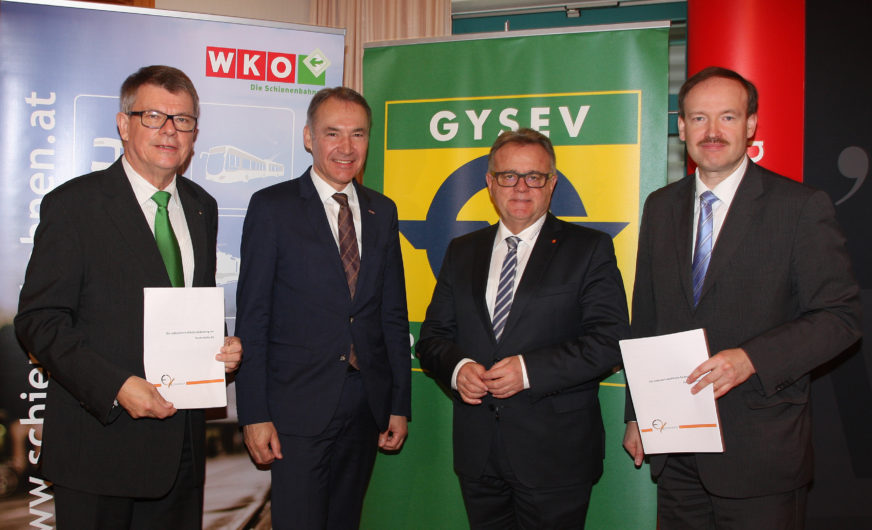 “Between 2004 and 2013 Raaberbahn AG has invested more than EUR 34 million to modernise its routes and infrastructure. This is an enormous added value and a positive contribution to employment in our federal state“, said Dr. Csaba Székely, Vice General Director, Raaberbahn on a press conference. He gave an insight into Burgenland-related data from a regional survey of the Railway Division of the Austrian Economic Chamber, conducted by the Institut Economica.

Dr. Christian Helmenstein, Head and author of the study: “The EUR 34 million Raaberbahn invested into infrastructure in Burgenland, in turn resulted in added value of EUR 30 million in Austria. This means that every euro invested by Raaberbahn creates EUR 1.2 more added value in Austria”.

Raaberbahn AG has today 159 employees, all of them full-time. Also here, the study reveals positive effects. “Through investments into the expansion of the routes and expenditures for running operations, Raaberbahn AG creates further employment.”

“Every full-time job with Raaberbahn secures 1.2 jobs within the value added network. This is an outstanding figure, notwithstanding which industry“, said Christian Helmenstein. “We are an important employer in this region and strengthen the job offer situation also in the periphery. The fact that our investments create additional jobs confirms our operational but also economic performance in the region“, added Székely.

Raab-Oedenburg-Ebenfurter Eisenbahn AG (short: Raaberbahn AG) is an Austro-Hungarian railway company. The Hungarian name of the company is: Győr-Sopron-Ebenfurti Vasút Zrt. (short GYSEV Zrt.). The company is headquartered in Sopron (Hungary). In Austria, Raaberbahn hast wo locations – in Vienna and Wulkaprodersdorf; Vienna is the Austrian headquarters of the company.

The Győr-Sopron-Ebenfurt route is held by Raaberbahn AG. Moreover the company operates the route “Neusiedler Seebahn” between Fertőszentmiklós (Hungary) and Neusiedl am See (Austria). Since December 2001, also the Sopron-Szombathely route is operated by the company, and since 2006 the Szombathely-Szentgotthárd route.

In 2011 the Hungarian government as owner, charged company to operate another 214 railway kilometres in Hungary. The routes are the following: Rajka-Hegyeshalom-Csorna-Répcelak-Porpác, Porpác-Szombathely, Szombathely-Kőszeg, Szombathely-Zalaszentiván as well as the segment Körmend-Zalalövő, where traffic is currently closed down.