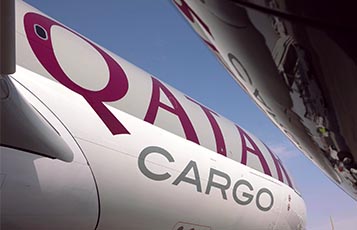 Qatar Airways Cargo has welcomed the seventh Airbus A330F and first Boeing 747F nose loader aircraft to its fleet at its home base in Hamad International Airport, Doha. Continuing on its trajectory of rapid growth and expansion, the world’s third largest international cargo carrier now features a fleet of 16 freighters including seven Airbus A330F, eight Boeing 777F and one Boeing 747F.

Qatar Airways Cargo is scheduled to receive further aircraft next year and is expected to expand its fleet to a total of 21 freighters by 2017, demonstrating the airline’s unwavering commitment to developing one of the strongest air cargo fleets in the skies.

Powered by Rolls Royce Trent 772B engines, the A330 freighter can carry a maximum gross pay load of up to 68 tonnes, with a range capability of up to 4,000 nautical miles. The new aircraft is currently scheduled to support the airline’s busy network by increasing frequencies to Bahrain, Brussels, Chennai, Hyderabad, London Stansted and Mumbai.

The B747 freighter is capable of flying 4,100 nautical miles with full load and is most appropriate for short- to medium-length international flights.