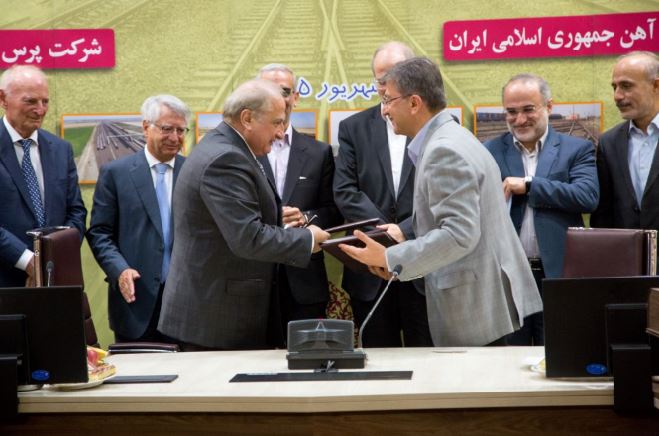 PTB Perse International Forwarding Co., Tehran, a subsidiary of the Swiss TransInvest Group, has won the tender for a concession to develop and operate the Aprin terminal, approximately 20 kilometers southwest of Tehran. On 18 September the contract was signed in a ceremony at the headquarters of the Iranian Railways (RAI) in Tehran.

The concession is a 25-years license for a so-called BOT operator model (Build-Operate-Transfer). It provides for a three-years construction period and 22 years of operation. Aprin shall become Iran’s largest dry port and a modern rail logistics terminal with customs clearance and customs warehouse. The area has a total size of approximately 450 hectares.

The PTB Group was awarded the contract for the first phase. This involves the development and operation of 55 hectares, with annual capacity of 400,000 TEU. The planned investments in the infrastructure of the area amount to approximately USD 30 million.

Overall, Iran had a great potential for the railway sector. In particular, the region around the capital attracts many transports. Today 600-1,200 daily wagons for Greater Tehran and other domestic stations arrive at Aprin. In addition, there are plans to expand the existing rail network. Currently, Iran has about 11,000 kilometers of rail track, further 9,500 km are under construction.

The PTB Group has long been transporting containers on the railway from the port of Bandar Abbas to Tehran. In future, the containers will be loaded directly from the ships in the Persian Gulf to the railway, and transported to Aprin, where customs will be cleared.

Founded in 1961, the PTB Group employs today around 450 persons at 15 locations and is considered as a leading logistics provider in Iran. Since it was founded, the company has built and operated own customs warehouses as well as port, railway and logistics terminals with a total of more than 1.3 million m², including also the management of terminals not owned by the group. PTB implemented modern 3PL services including door-to-door services, customs handling, warehousing and distribution, and has a market-leading position in transit traffic through Iran.