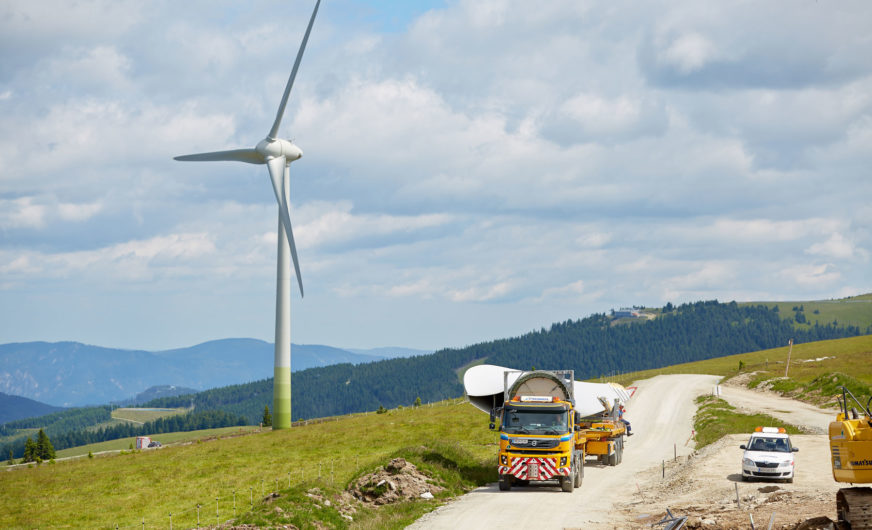 As the country’s largest manager of the natural environment, Austrian Federal Forestry has been pushing energy recovery using renewable resources. Pretul wind farm is being built in the Pretul Alps at around 1,600 metres above sea level and extends across the districts of Langenwang, Mürzzuschlag, Ratten and Rettenegg. It consists of 14 wind turbines, each with a hub height of 78 meters and a rotor diameter of 82 meters. With annual production of 88 gigawatt hours (GWh), they are capable of supplying some 22,300 households with green energy.

The wind farm is in the immediate vicinity of the existing wind farms Steinriegel and Moschkogel, whose development was also overseen exclusively by Prangl. This time also, it was the role of the team of experts from Prangl to find the right transport, temporary storage, and lifting concept.

Since it was only possible to upgrade the transport routes chosen on a limited basis, due to their exposed location, this time it was necessary to move to entirely new technologies. For the first time, Austria’s most powerful telescopic crane – a 1.000-tonne giant – was deployed. The 9-axle PTK 1000 is classed as the world’s most powerful road-going all-terrain crane.

With a maximum system length of 163.3 meters, the telescopic crane was specially developed for wind energy. Its extremely short changeover times made it the preferred large crane for the Pretul wind farm. By offering this new dimension for cranes in Austria, Prangl was able to stand out from all of the alternatives.

This new crane technology was also accompanied once more by the tried-and-tested PFTV 300 blade transport system. Up to now it has been used to successfully transport 150 rotor blades. Today it is impossible to imagine the construction of an alpine wind farm being executed without this blade transport device, a development which Prangl initiated and was heavily involved in. The need to interfere with nature was reduced to a minimum. It was also possible to make the entire construction process much more efficient.

For such a major project, it is important for all of the logistics components to come from a single source. This is why the transport of all components by road was also undertaken by Prangl, as well as all temporary storage on-site. A total of six mobile cranes (with a lifting capacity up to 1,000 tonnes), 3 telehandlers, and a wide range of transport equipment were used.