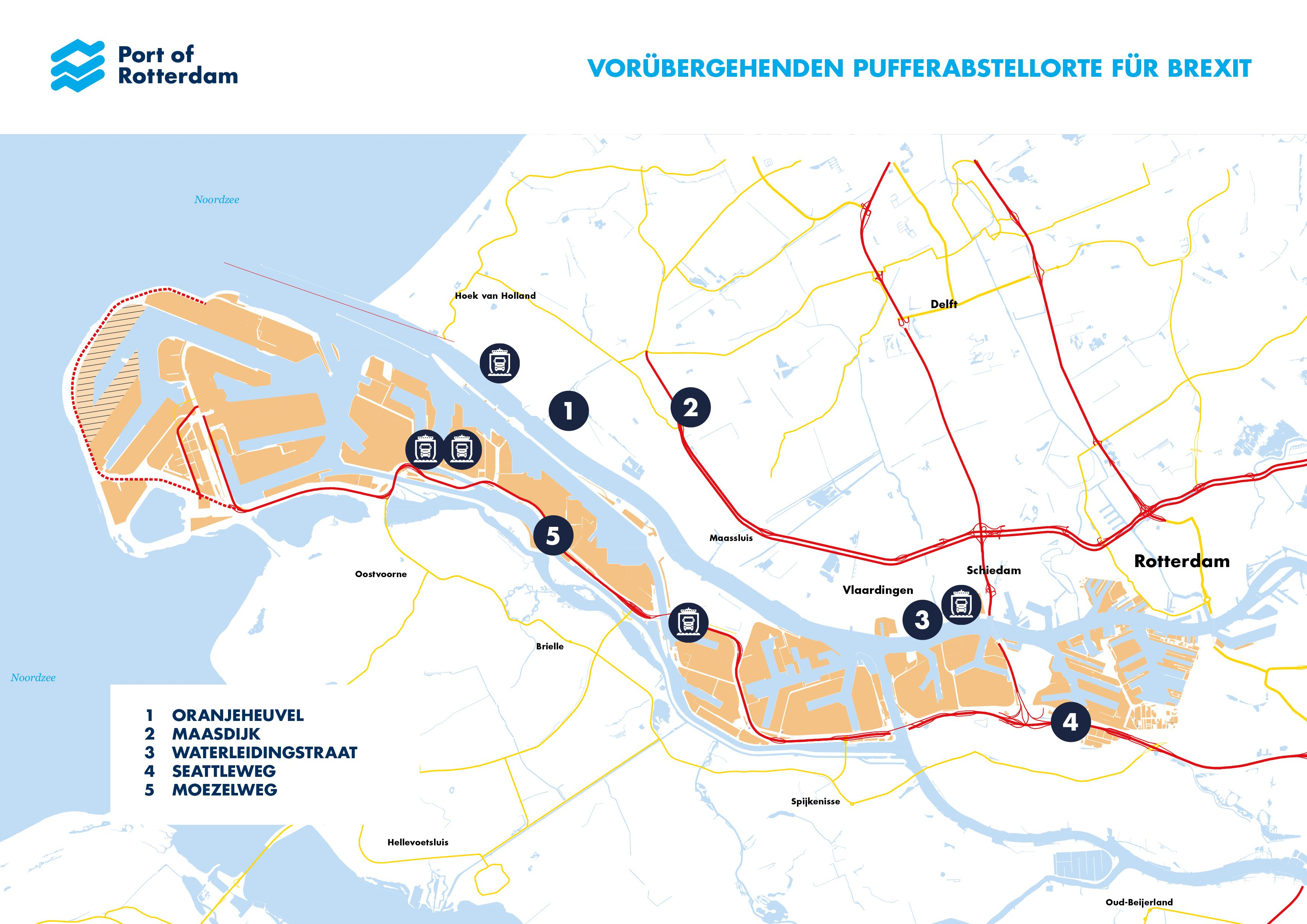 The Port of Rotterdam Authority, the Municipality of Rotterdam, the Municipality of Vlaardingen and highways authority Rijkswaterstaat, are creating five new buffer parking sites. Trucks will be able to wait here temporarily if their customs documents have not been properly prepared for maritime crossings to the United Kingdom, in the event of the country leaving the European Union on 29 March 2019.

The aim of the coordinated action is to minimise any extra delay resulting from additional customs formalities at ferry and shortsea terminals and to ensure that freight traffic to an from the UK runs as smoothly as possible.

The temporary buffer parking sites are marked out on the map. In the event of this additional capacity being insufficient, the organisations have additional overflow areas in reserve. Moreover, Rijkswaterstaat has been discussing traffic control plans with all parties to make sure it flows efficiently.

Of the approximately 54 million tonnes of freight that is traded annually between the UK and the Netherlands, around 40 million tonnes passes through the port of Rotterdam, and in particular via ferry and shortsea crossings. As soon as Brexit is a fact, the Dutch sea ports will form an outer border between the EU and the UK and this will have major consequences, in particular for the processing of customs papers and passport control.

The Port of Rotterdam Authority and the ferry terminals in Rotterdam jointly arranged for a simulation study to be conducted into the effects of Brexit on the processing of freight traffic at and on the approach to the terminals. Based on historical data, it can be assumed that approximately 400 trucks will not have their formalities in order.

The results of this simulation study have allowed a substantiated estimate of the required number of temporary buffer parking places for heavy goods vehicles to be made. The figures mean the authorities can expect that the 700 additional spaces provided at buffer parking sites will be sufficient.

On the southern bank, buffer parking sites are being created on Moezelweg and Seattleweg by order of the Port of Rotterdam Authority. The site on Moezelweg will provide space for approximately 290 trucks. This site is in the vicinity of the ferry and shortsea terminals that operate out of the Europoort port area. The site on Seattleweg will provide space for approximately 80 trucks. Both sites can easily be reached from the A15 motorway, from both the easterly and westerly directions.

The buffer parking sites are only accessible to trucks that have not been given access to the ferry terminals in the port of Rotterdam because the Portbase system has not received prior notification of their cargo. Truck drivers can use these locations to liaise with their client or transport planner and make sure the necessary formalities can yet be completed.

The Port Authority, the Municipality of Rotterdam and Rijkswaterstaat are advising exporters, hauliers and shippers to use Portbase to provide digital notification of their cargo that is destined for the UK. Using this Dutch supply chain solution for Brexit, cargo can pass quickly and without unnecessary delay through customs to and from the UK, even after Brexit.