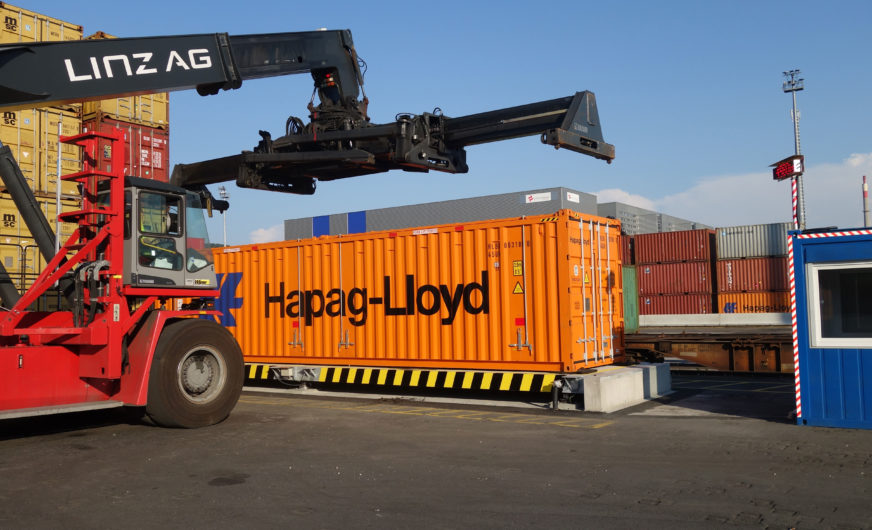 Without specifying the VGM (verified gross mass), thus the exact gross weight, no more container can be loaded to a seagoing vessel from 1 July 2016. As many shippers can not use the calculation method, or have no scale available, the port of Linz decided to build a calibrated 50 tonnes scale directly at the container terminal, and to offer its customers a container weighing service.
In due time before the the legal regulations became effective, the scale was put into operation. Within a week, more than 150 containers have already been weighed.
Containers arriving at the terminal by truck or train are lifted by crane or container forklift to the scale. Thus, the legally required VGM (gross mass of the container consisting of own weight, cargo weight and the weight of the load securing equipment including container tare) can be determined by a single weighing.
The respective weighing documents are promptly forwarded to the customers, so the necessary export customs documents can be issued or the shipping lines can be informed about the weight in due time before the arrival of the containers in the seaport.
With effect from 7 June 2016, the container terminal of the port of Linz was certified as AEO (Authorized Economic Operator). The facility thus has a special status – it is regarded as particularly reliable and trustworthy in the international supply chain – from producers to the end consumers.
This status is recognised worldwide. An increasing number of international customers of the terminal requires this status, which can be decisive for future orders.
Moreover, adhering to the strictest security requirements results in benefits in the form of simplified customs processes and security-related customs controls.
www.hafenlinz.at