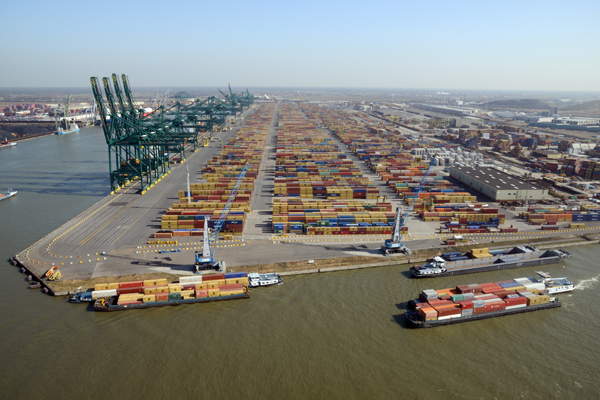 As part of the development of Europe’s largest container terminal on the left bank of the river Scheldt in Belgium, MSC PSA European Terminal (MPET) has welcomed the arrival of five new Mega Quay Cranes built by ZPMC in China.
At over 130 metres in height, these ship-to-shore gantry cranes can reach across 25 rows of containers, making them fully capable of handling the world’s largest containerships deployed by the shipping line’s customers. These new dual hoist cranes are capable of handling two 40’ containers or four 20’ containers simultaneously, a feature which is ideally dovetailed with MPET’s straddle carrier operations.
MPET has also placed another order of four identical quay cranes from ZPMC, which are due to arrive towards the end of 2016. These new cranes will serve to reinforce MPET’s position as a major European gateway and global transshipment hub.
When fully operational, MPET will feature a total of 41 quay cranes across 10 berths, with a quay length of 3,550 metres and total handling capacity of 9 million TEUs annually. Employment is expected to grow in line with the volume increase.
The arrival of the new cranes is indicative of MPET’s cutting edge in terminal operations and management, and underlines the fast progress we are making in the development of our new terminal on the left bank. With this new facility we can continue to not only serve our customers well, but also maintain our commitment to handling increased volumes with fast vessel turnarounds,” says Dirk Oellibrandt, General Manager, MPET.
MSC PSA European Terminal (MPET) is the largest container terminal in the Port of Antwerp, handling more than 12,000 containers a day. Originally located on the right bank of the river Scheldt, MPET is in the process of moving its operations to the left bank as part of a plan to meet the increasing needs of its customers. When completed, MPET – which is a joint venture between PSA and TIL Group – will become the largest container terminal in Europe.
www.psa-antwerp.be  www.tilgroup.com