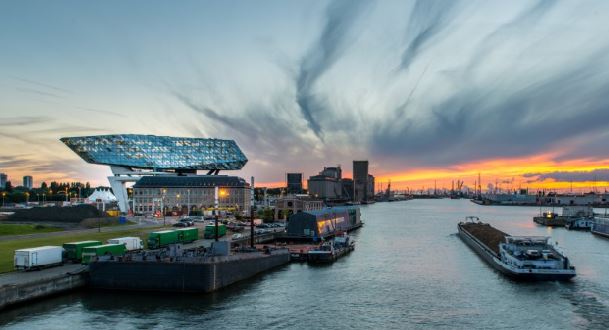 The new Port House in Antwerp repurposes, renovates and extends a derelict fire station into a new headquarters for the port – bringing together the port’s 500 staff that previously worked in separate buildings around the city.

In 2007, when the former 1990s offices of the Port of Antwerp had become too small, the port determined that relocation would enable its technical and administrative services to be housed together, providing new accommodation for about 500 staff. The port required a sustainable and future-proof workplace for its employees, representing its ethos and values in an ever-expanding local and international arena.

As the threshold between the city and its vast port, Mexico Island in Antwerp’s Kattendijk dock on Quay 63 was selected as the site for the new head office. The waterside site also offered significant sustainable construction benefits, allowing materials and building components to be transported by water, an important requirement to meet the port’s ecological targets.

Following the construction of a new fire station with facilities needed to service the expanding port, the old fire station on the Mexico Island site – a listed replica of a Hanseatic residence – became redundant and relied on a change of use to ensure its preservation. This disused fire station had to be integrated into the new project. The Flemish government’s department of architecture, together with the City and Port authorities organised the architectural competition for the new headquarters – and the winner was Zaha Hadid Architects.

Now the old fire station’s central courtyard is enclosed with a glass roof and transformed into the main reception area for the new Port House. From this central atrium, visitors access the historic public reading room and library within the disused fire truck hall which has been carefully restored and preserved. Panoramic lifts provide direct access to the new extension with an external bridge between the existing building and new extension giving panoramic views of the city and port.

The client requirements for an ‘activity based office’ are integrated within the design, with related areas such as the restaurant, meeting rooms and auditorium located at the centre of the upper levels of the existing building and the bottom floors of the new extension. The remaining floors more remote from the centre, comprise open plan offices.

“The architectural style of the original building, a replica of the former Hansa House, recalls the 16th century, Antwerp’s ‘golden century.’ But now above this original, a contemporary structure in shining glass has been built, which I am sure, represents a new golden century for Antwerp,” said Marc Van Peel, president of the Port of Antwerp, on the occasion of the inauguration.

Antwerp handles 26 percent of Europe’s container shipping, transporting more than 200 million tonnes of goods via the ocean-going vessels that call at the port and providing direct employment for over 60,000 people, including more than 8,000 port workers. Indirectly, the Port of Antwerp ensures about 150,000 jobs and has ambitious targets for future expansion to meet the continent’s growth and development over the next century.