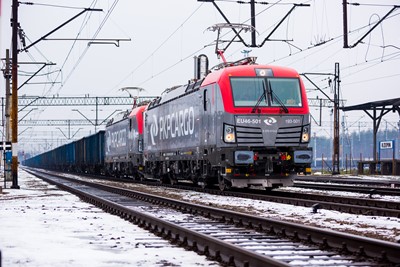 In 2015 PKP Cargo persistently built the foundations to bolster its position in Poland and international market expansion. The acquisition of AWT, one of the largest private rail carriers in Europe and signing an agreement to purchase PKN Orlen’s rail assets formed a genuine lever for its operating business. These acquisitions were supported by establishing strategic cooperation with HŽ Cargo, Croatia’s national carrier, giving PKP Cargo access to the Adriatic ports.

PKP Cargo has stipulated its growth plans and the actions to achieve them in the strategy for 2016-2020. The major objectives for Poland’s largest operator are maintaining the position of the undisputed leader of railway transport in Poland, the comprehensive handling of international freight traffic passing through Poland and taking the position of a leading intermodal operator in Central and Eastern Europe.

Therefore the cargo railway signed a historic agreement to purchase 15 multi-system locomotives to handle cross-border traffic. These locomotives allow transporting freight across several countries without switching locomotives. The first six new locomotives have already started to handle connections between Poland and Germany. The next locomotives will be used to transport coal, containers, automobiles and other cargo to the Netherlands, Austria, the Czech Republic, Slovakia and Hungary.