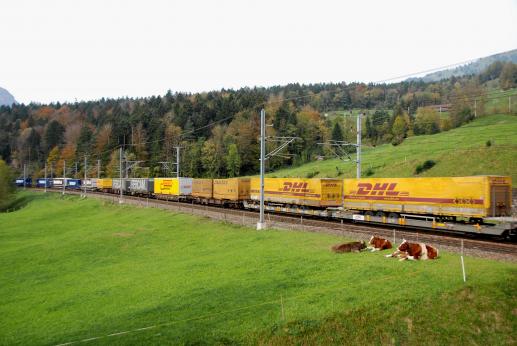 The unsatisfactory operating quality of the railway network, which has dropped to a new low this year as a result of various factors, is worrying the person in charge at the Swiss combined transport operator Hupac. “If the railway system fails to counteract this trend, we will cut ourselves off from the market”, said Hupac’s Managing Director Bernhard Kunz. However, Hupac has successfully compensated the delays, at least in part, by taking organisational measures. The desired 95% punctuality rate requires structural changes, such as equal treatment of freight transports and passenger transports and the introduction of a compensation system with a noticeable steering effect.
“Trains operating on time have a positive impact on the productivity of the resources that are used, such as personnel, engines, rail wagons, and terminals“, explained Kunz. “On-time trains make happy clients. And they save money to the benefit of the entire railway system.”
Hupac ended the first half of 2015 with a 1.3 per cent decrease in transports. The Swiss combined transport operator carried a total of 335,295 road consignments in unaccompanied combined transports. The negative development was caused by a number of strikes in Germany, France, Belgium, and Italy, and traffic disruptions due to construction work and accidents.
In the segment of transalpine transports through Switzerland Hupac suffered a loss in volume of 2.7 per cent compared to the prior year period. A line in Austria had to be discontinued, which resulted in a 20.1 per cent decrease in transports. Once again Hupac achieved a 5.4 per cent growth rate in non-transalpine transports, thus strengthening its position in the emerging markets in eastern, south-eastern and south-western Europe. Transports within Europe, such as the new connection between Cologne and Malmö, also contributed to this encouraging result.
Hupac expects the moderate demand for transports to continue for the rest of this year. The elements of uncertainty include declining fuel prices, which is favouring road shipments. In addition, the Swiss providers of rail freight services are burdened by the continued strong Swiss currency compared to the euro.
www.hupac.com