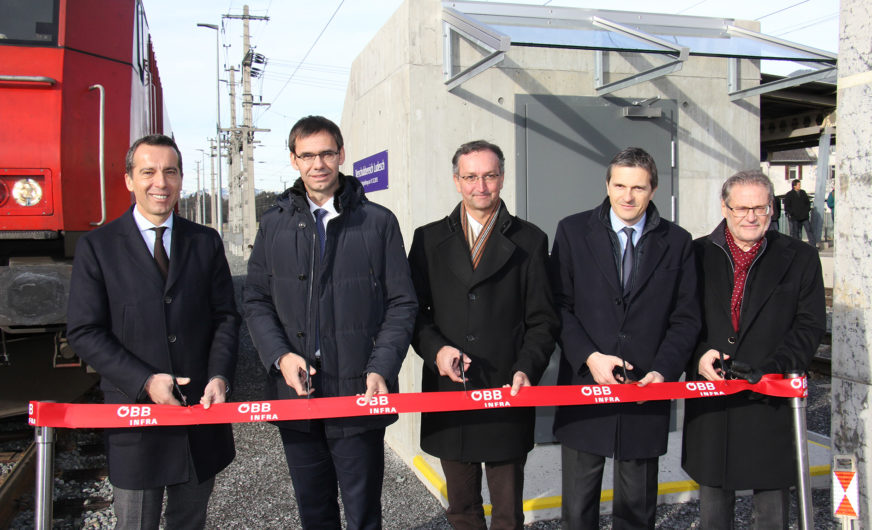 Following an 18 months-construction period and a total investment of EUR 12.8 million, four additional rail sidings for manipulation and disposition of cargo railcars are now available in Ludesch. An additional shunting track ensures autonomous and simple shunting of the railcars, whiteout affecting the rail traffic on the main tracks.

Moreover the extended pedestrian underpass ensures secure access to the new tracks for the shunting staff.

Since the construction started in the summer of 2014, more than 1,800 metres of new shunting tracks and rail sidings, as well as eight switches were set up at the railway station in Ludesch. This equipment is a major contribution to ensure the handling of cargo transport and the increasing cargo volume also in the future.

In the future freight railcars for the customers will be handled economically more efficient, faster and more secure directly in Ludesch.

The new shunting area and the company’s railway siding will be approached in a four-hours interval, six times per day, from Monday to Sunday. In total, the new infrastructure has a capacity for up to 80 railcars per 24 hours.

The additional tracks in Ludesch are a relief of the heavily frequented route section between Bludenz and Ludesch. There will also be a noticeable relief for the hub railway station in Bludenz, because the tracks are less occupied by the provision of cargo railcars.

“Ludesch is a very important project for us. We are glad to make a contribution in support of the Vorarlberg economy. Our goal in freight transport is clearly defined: by 2020, we want to deliver some 150 million tonnes of goods per year in Europe and significantly expand our international business. Modern terminals and cargo railway systems are investments into the future and form the basis of success,” said Christian Kern, CEO ÖBB.

Since December 2014, the construction work is in progress to expand the terminal in Wolfurt. In the years until full operation in August 2018, around EUR 66 million will be invested in three construction phases of the current master plan. In Vorarlberg, in the important triangle of Switzerland – Austria – Germany, the capacity for rail cargo transport will be doubled.