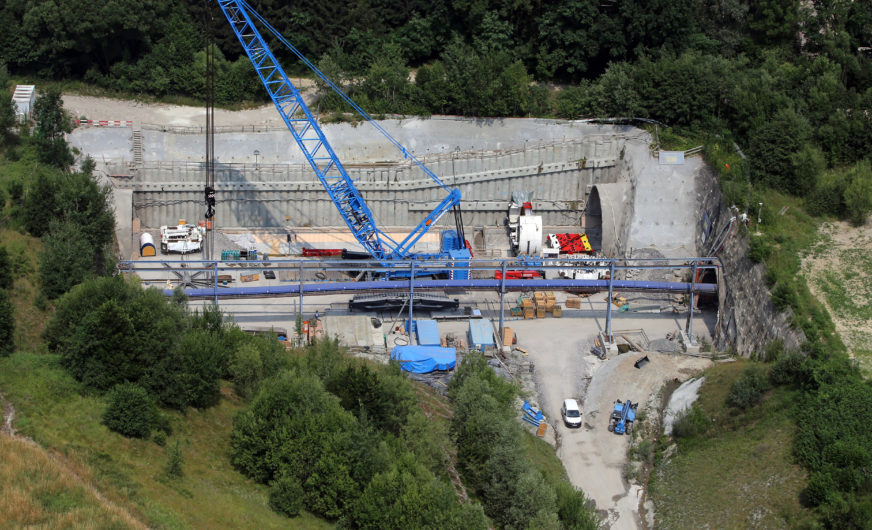 The world’s sixth longest railway tunnel project is currently under construction. In total about two thirds of the tunnel works have been completed by now. From the Carinthian side blasting works are carried out in the southern tunnel, now about 10 kilometres long, at a depth of about 1,200 metres in the Koralm mountain massif. The northern tunnel is about 600 metres long. In the intermediate heading in Mitterpichling the assembly of the third mega driller has started recently. This driller will be used to build another about 12 kilometres tunnel segment.
“After about 7 years of construction, two-thirds of the tunneling works are completed,” explains Klaus Schneider, Koralmbahn project manager, ÖBB-Infrastruktur AG. “In Carinthia drilling and blasting works are just about to reach the 10th kilometer of the tunnel in the southern tube (according to the New Austrian tunnelling method). Two tunnel drilling machines are advancing from Styria towards Carinthia. Both machines are currently about 15 kilometers within the mountain.
From the Styrian side about 6 to 7kilometres have to be drilled until the tunnel breakthrough. A huge challenge that the construction crews are facing around the clock. Currently there are approximately 900 persons directly employed on the construction sites of the Koralm tunnel
– mainly from Styria and Carinthia. Many other regional partners with hundreds of workers are operating between Wettmannstätten and the tunnel portal.
The tunnel drilling machine for Carinthia, is delivered with some 120 transportations, of which around 20 heavy transportations (about 24 tonnes). The heavy transport can only be carried out during the night hours in order not to disturb road traffic too much. The individual components are assembled like an oversized puzzle. Also, the caterpillar crane, a gigantic “heavyweight”, was delivered by several heavy transporters.
Already in the next few days some parts of the drill head will be mounted. The heaviest part, the main drive, is weighing an impressive 200 tonnes. “The tunnel drilling machine is, like the other two, a fabrication plant,” explains Schneider. “When it will start its 12-kilometers-long work in October, it will weigh around 2,500 tonnes and be 250 meters long. The machine breaks out material, and also has features for lining the tunnel with special precast concrete elements, the so-called tubbing. These segments are concreted and stored in a dedicated plant on the construction site at Lavantboden. ”
As in Styria, also in Carinthia a designated rail-material conveyor path is built. The rail system will have a final length of around 30 kilometres. “This narrow-gauge railway is primarily used to bring teams, building material and concrete segments for the tunnel drilling machine,” explains Schneider. “The removal of the tunnel excavation material is carried out by conveyors that are already installed in many areas.”
This year ÖBB invest in Carinthia around EUR 219 million into the renovation and construction of infrastructure facilities and are one of the biggest investors in the country. By 2019 approximately EUR 1.7 billion will flow to Carinthia on behalf of the federal state to build modern rail infrastructure and to improve the existing.
www.oebb.at