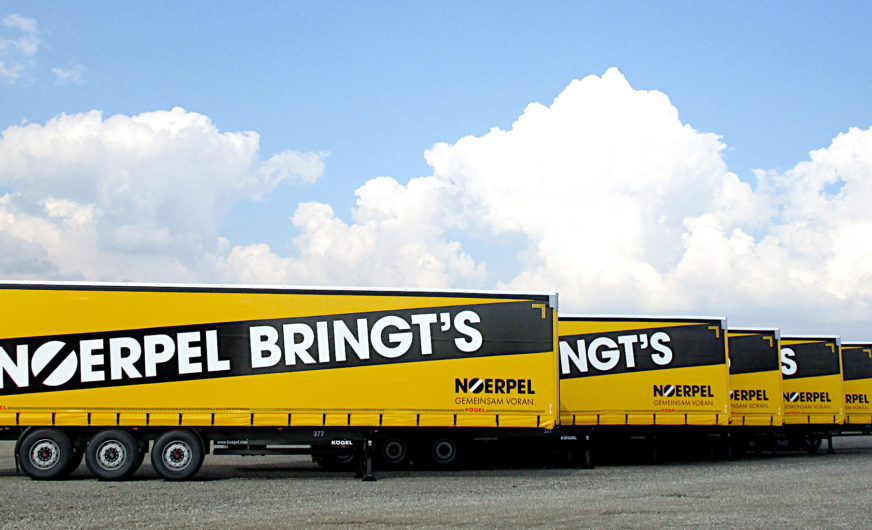 The Noerpel logistics group headquartered in Ulm has signed a purchase agreement for 155 trailers manufactured by Kögel. Thus, the company increased its fleet to a total of 500 company-owned truck trailers.

Between the end of September and December 2016, Kögel delivers 110 Cargo curtain-sider semi-trailers and 45 Box dry freight semi-trailers to all 13 Noerpel locations in Germany. The logistics company will deploy the semi-trailers mainly in pan-European groupage and general cargo transport.

“Adding the brand new trailers to our own fleet is our response to the growing demand for international land transport, among other things,” says Frank Irslinger, CEO of C.E. Noerpel GmbH. Noerpel is investing a single-digit million amount into the purchase of the new vehicles for now, and a further order for another 100 Kögel semi-trailers is planned for 2018.

Established in 1881, Noerpel is today according to its own information, “a leading logistics service provider in southern Germany, and a regional leader for export in Europe.” By linking the areas of forwarding, logistics, co-packing and temporary workers as well as close network connections, the group provides comprehensive services from a single source. With about 1,700 employees at 13 locations Noerpel achieved a turnover of more than EUR 300 million in 2015.

The fifth generation-family company has branches in northern and southern Germany, the Rhineland and the Czech Republic, giving it an optimal position for German domestic transport as well as imports and exports in Europe. Apart from southern Germany, Noerpel is also a leading logistics company in Vorarlberg and northern Switzerland. Heidenheimer Kentner Kraftwagen-Spedition GmbH & Co. KG and Ascherl-Noerpel GmbH Co. KG are part of the corporate group.